By Hugh Rogers              “Corridor H—Finish It!” say the faded blue stickers on more than a few trucks around here. The stickers are old but the message still lives. In June, Senator Joe Manchin introduced the “Finish the ADHS Act”. ADHS stands for Appalachian Development Highway System, a sixty-year-old concept whose time may have come for [...]

September is here and once again we will see the spectacular annual transformation of the mountains to the vibrant shades of orange, yellow, and red. It is very interesting to read what causes the transformation at https://pss.uvm.edu/ppp/articles/fallleaves.html. For many this is their favorite time of year. Once again, I want to extend my thanks to our members [...]

Fall Review and Annual Meeting on Saturday and Sunday, October 30 and 31, 2021 The theme of this year’s Fall Review is Climate Change.  Although plans are preliminary, on Saturday we hope and expect to have speakers to talk about: energy policy, our work with the Conservation Hub and Dolly Sods Stewards Program, and keynote speaker and author Katie [...]

By Cynthia Ellis Where Do They Go? “Have a nice trip!”  That’s a silly something that we birders would sometimes call out to migrating raptors in September as we watched them zip, soar, or glide past us at the Hanging Rock Raptor Observatory in Monroe County.  And if visitors asked where the birds DID go, we answered [...]

By Dave Johnston Fall is the busiest part of the busy season in the West Virginia highlands, and Dolly Sods is always at the center of the storm. People come from far and wide to take in the vast fields of scarlet blueberry and huckleberry leaves amidst the boulders of Bear Rocks. Many venture into [...]

By Cindy Rank Developers (Dominion) of the previously canceled Atlantic Coast Pipeline (ACP) are currently considering how to reclaim the abandoned areas of its now defunct plans for its giant gas pipeline that would have run through WV, VA and North Carolina – i.e., whether or not to leave the already-buried pipe in the ground, [...]

Coal mine Special Reclamation–What problem? Where?

Cindy Rank If there ever was a robust program on paper that was more like swiss cheese in practice, look no further than the West Virginia coal mine bonding program. Untold numbers of articles in the Highlands Voice over the years have explained West Virginia Highlands Conservancy’s (WVHC) role in multiple attempts to plead with, cajole, and [...] 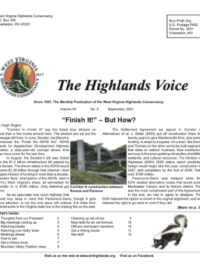