Getting Ready for the Legislative Session

September and 2020 are flying by at what certainly seems to be warp speed. So much has been accomplished and yet so much is still on our plate to keep us busy. Certainly the passage and signing into law of the Great American Outdoors Act and, as stated in last month’s Highlands Voice article , Atlantic Coast Pipeline in the [...]

By Lewis Freeman, Executive Director, Allegheny-Blue Ridge Alliance and Daniel Shaffer, ABRA Geospatial Consultant Among the lessons learned from the recent fight against the Atlantic Coast Pipeline project were the limitations that regulatory agencies often have in conducting in-depth analysis of a project’s impacts, particularly when multiple projects would produce cumulative impacts.  Also, the complexity of [...]

By Rupert Cutler Once upon a time in America, Republicans led the way in science-based initiatives to protect the environment. For example: •           The Morrill Act created land grant colleges to teach agricultural science. Ours is Virginia Tech, where an entire college is devoted to the study of natural resources and the environment and agriculture majors [...]

Migratory Birds Dodge a Bullet (at least for now)

By John McFerrin             Migratory birds will now receive greater protection than they otherwise might have, thanks to a decision by a United States District Court in New York.  The Court vacated a legal opinion issued by the United States Department of the Interior interpreting the Migratory Bird Treaty Act.  The interpretation dramatically narrowed the protections of the [...]

We Have Lost a Great Friend

Cool Facts about the Cerulean Warbler

On the wintering grounds in South America the Cerulean Warbler usually is found in mixed-species foraging flocks, associating with tropical tanagers and other resident species.When renesting after a failed first nest, the female often uses spider web from the old nest to start construction on the new nest. Fresh lining is gathered for the new [...]

ClimateWise: The Causes of Climate Change

A New Use for Public Lands?

Public lands, especially our National Forests, are managed for “multiple use.”  By statute, they are required to be managed for the often competing values of recreation, grazing, timber, watershed protection, wildlife and fish, and wilderness. Historically, that management has included energy production and mineral extraction.  In the past, that has meant coal, oil, and gas.  Most of this has taken place in the [...]

In the company of trees

By Danske Dandridge If one wishes to be taken into the intimate confidence of a great tree, and to get the full enjoyment of Its strength and beauty, he should lie upon his back on the greensward beneath it, cross his arms under his head by way of pillow, and let the eye climb slowly [...] 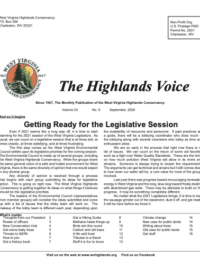