A Better Direction for Corridor H

By Hugh Rogers             Word came in early August that the West Virginia Division of Highways (DOH) was “re-starting” the disputed Parsons-to-Davis section of Corridor H. Questions would be answered at a public meeting at Blackwater Falls State Park on August 20.             Quick answer to Question No. 1: Still no Record of Decision, i.e., final go-ahead, [...]

By Frank Young The WV Environmental Council (E-Council) is the lobbying group for the greater community of both large and small West Virginia environmental organizations.  Most of WV E-Council’s budget comes from its member groups’ financial support and is used to pay lobbyists to support E-Council’s legislative priorities.   Accordingly, every summer the E-Council surveys its member [...]

Come join us for a weekend of fun, friendship and learning. When: Fri. 10/18,Sat.10/19 and Sun. 10/20 Where: Elk River Inn and Restaurant, Slatyfork, WV What: Outings, Programs, Panels and Fun Theme: Seeking a sustainable future for West Virginia We will visit a pipeline site and learn about the reconnaissance project and its successes.  We will talk [...]

There have been more developments with the Land and Water Conservation Fund.  Although it began in 1965 the Fund was not permanently authorized. Its authorization had to be periodically renewed.  It most recent lapsed in September, 2018, due to the partial government shutdown and other disputes.              Congressional action last spring authorized the fund permanently; t will no longer [...]

By Kate Mishkin One of Gov. Jim Justice’s family mines is violating the Clean Water Act and Surface Mining Control and Reclamation Act, a coalition of environmental groups said in a lawsuit filed Tuesday. The lawsuit, filed against Bluestone Coal Corporation, says the company is discharging pollutants into water near the Red Fox Surface Mine [...]

Over the past two years, thousands of communications tower operators have updated their lighting systems by turning off steady-burning (L-810) side-marker lights that attract birds and cause millions to die from collisions each year. (Flashing lights remain atop these towers, ensuring aviation safety.) Since 2016, more than 2,700 of about 13,900 tall towers have made [...]

Among the activities that will take place during the West Virginia Highlands Conservancy Fall Review are the Annual Membership Meeting and the quarterly Board meeting. The Annual Membership Meeting will be held at 9:30 AM on Sunday, October 20th at the location indicated for the WVHC fall review. The Board meeting will follow immediately afterward. The [...]

Hemlock wooly adelgid, a tiny insect pest, was discovered in the western United States in the 1920s and was first observed in the East in the early 1950s near Richmond, Virginia, perhaps having traveled on nursery plants from Japan.  The hemlock wooly adelgid is a serious invasive I the East and it now can be found [...] 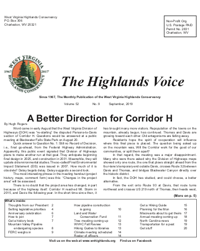