The West Virginia Highlands Conservancy (WVHC) has received a contribution from the Explorers Club of Pittsburgh (ECP) in the memory of former ECP club members George Bogel and Robert Broughton. I did some research before responding to thank ECP for the contribution. The transmittal letter from ECP stated that Bob Broughton was involved in the [...]

By Cindy Rank Ben Stout, father, teacher, friend, scientist, ecologist, activist and lover of life, died August 3, 2018.  Since then there has been an outpouring of fond remembrances from a multitude of friends, acquaintances, and co-workers. When I first heard I sent the following message to the WV Highlands Conservancy Board.   Sad news [...]

After eleven+ years in the position, Beth Little is retiring and resigning her position at the West Virginia Highlands Conservancy. Because of that THE WEST VIRGINIA HIGHLANDS CONSERVANCY, the state’s oldest and largest environmental advocacy organization, is seeking a membership and fulfillment secretary with strong organizational skills and a passion for the environment. Primary responsibilities [...]

Banding Birds for Over Six Decades

By LeJay Graffious Each year, in late summer through early fall, volunteers gather near Red Creek campground on the Dolly Sods Wilderness Area, to help with banding efforts of migrating birds. This year, 2018, has been designated by National Geographic and Audubon as “The Year of the Bird,” in honor of the anniversary of the [...]

Where do the birds go from here?

By LeJay Graffious Joan Bell Pattison maintains the recovery data related to the AFMO. Fewer than 100 birds banded at AFMO have been found away from the station. This rate is low when compared to the time and effort involved to band nearly 300,000 birds, thus showing the importance of each band.  But this is [...]

By LeJay Graffious The small banding building is only used for about 2 months and is assembled and taken apart each year.  The idea for a shelter began in 1979, with Ralph Bell and George Hall discussing with Kathleen Finnegan about the addition of a shelter to be more convenient for the aging banders and [...]

By LeJay Graffious Maggie Perl returns from the net lanes with several brown paper bags, each labeled with a bird alpha code and twisted at the top to create a safe air space for the bird being transported. She hands them over to me, the bander on duty. I do a quick scan of the [...]

Assembled by Rick Webb, Highlands Conservancy Board Member and Chair of the Allegheny-Blue Ridge Alliance CSI Program When the Federal Energy Regulatory Commission (FERC) approved construction of the ACP in late 2017, it made its approval conditional upon approvals from other regulatory agencies. However, when a U.S. Fourth Circuit Court of Appeals ruling in May [...] 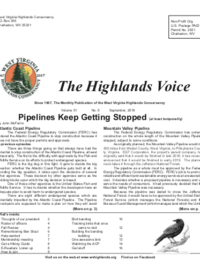