Welcome!  Greetings!  Salutations!  Whether you are with us in person at our 50th anniversary celebration, or checking up on us by reading this at home, we send you our very best wishes for being part of the first 50 years of the West Virginia Highlands Conservancy. Throughout this year we’ve looked back at our past.  [...]

Putting the Brakes on Corridor H: A Brief History

By Hugh Rogers In early July, I got a call from a free-lance writer in Michigan. She was doing a piece on Corridor H for a magazine called Construction. Part 1, “52 Years and Counting – Corridor H Continues in West Virginia,” was done. She wanted to interview me for Part 2. Corridor H opponents [...]

By Cindy Rank West Virginia Highlands Conservancy filed its first lawsuit against strip mining in 1967.  That was the beginning of 50 years of leadership on coal mining issues in West Virginia.  Now, in 2017, together with local and national partners, we continue to challenge unwise mining practices, weak enforcement of laws and regulations, and individual [...]

Canaan Valley for the Future

The West Virginia Highlands Conservancy was one of many non-governmental organizations and individuals whose support was instrumental in conserving a large portion of Canaan Valley as a National Wildlife Refuge.  As we examine our progress on this, our 50th anniversary, let’s take a brief look at what was a very long story. Pre- 1970 The [...]

The Highlands Conservancy’s Contributions to Wilderness

By George E. Beetham Jr Before the coming of European explorers and settlers, all of the land in what is now West Virginia was wilderness. Much of the land defied travel. Mountain slopes, laurel thickets (called laurel hells by later settlers), bogs, and forests of red spruce growing so thick a person could scarcely squeeze [...]

Working on Gas Almost Since the Beginning

By Cindy Rank West Virginia Highlands Conservancy has worked on gas drilling issues since the 1980s.  We participated with allies in Legislative hearings and negotiations aimed toward enacting the Surface Owners Rights Bill; served on Committees such as the former WV DNR Water Quality Advisory Committee in formulating ways to deal with pit waste generated [...]

Water Over the Dams These Last 50 Years

By Cindy Rank Just as bumper stickers claiming ‘Water is Life’ can be seen everywhere, one might say water has pretty much been the lifeblood of the West Virginia Highlands Conservancy because just about everything the organization has done these past 50 years is somehow and in some way connected to water. Love and respect [...]

West Virginia Highlands Conservancy friend and institutional Board member The Brooks Bird Club is celebrating its 85th Anniversary.  Congratulations! The Brooks Bird Club, Inc. is an independent, educational, non-profit organization which promotes the study and enjoyment of birds and other elements of the natural world. Its purpose is to inform members and the public of [...]

To celebrate the 50th anniversary of the West Virginia Highlands Conservancy and the 75th anniversary of the Kanawha Trail Club we’re having a joint celebratory hike! It will be on September 30, starting at 9:00 a.m. in Kanawha State Forest.  We will meet at Dunlop Hollow parking area, shuttle to Trace Fork trailhead, and Hike [...]

The Rest of the Story

This issue of The Highlands Voice celebrates our 50th Anniversary and looks at some of the things we have been involved in during the past fifty years.  No look at our history would be complete without acknowledging our chronicler David Elkinton.  In his book Fighting to Protect the Highlands, The First Forty Years of the [...]

Cynthia D. Ellis Cynthia D. Ellis [Cindy] is a retired teacher, environmental volunteer, and enthusiastic birder.  She’s a veteran contributor to state and federal bird population studies and enjoyed terms as president of Brooks Bird Club and of its Charleston [“Handlan”] Chapter.  She administers pages on social media for WVHC and for birders in the [...] 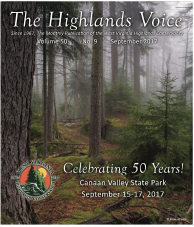