By Dave Johnston The last week of September and first two weeks of October are prime time in Dolly Sods. Although climate change appears to be causing the peak of fall colors to occur later, historically the last weekend of September heralds the onset of the brilliant color season in the northern West Virginia Highlands. [...]

To protect a fragile biome

By George E. Beetham Jr. We think of wilderness as being a vast expanse of wild land. Indeed, Dolly Sods consists of many acres of land. At the same time we need to understand that this area is a unique ecosystem with finite limits.  Essentially the Sods is a dissected, sub Arctic plateau featuring high [...]

Last year’s Annual Meeting was a bit topsy-turvey due our relative inexperience with Zoom meetings. Consequently, our normal election process was out-of-wack as well and our approach this year is an attempt to bring things back into routine. As it stands currently, the proposed slate of officers and directors to be voted on at October's [...]

By John McFerrin             A proposal for an expansion of the Hatfield-McCoy trail system for All Terrain Vehicles (ATVs) in Wayne County has come and gone, leaving what many had seen as a problem unaddressed.             The United States Army Corps of Engineers owns the land surrounding East Lynn Lake in Wayne County.  It does not, however, manage [...]

October, the month that keeps Mother Nature busy with her paint brush and pallet as she as she goes to work using scarlet, purple, orange, yellow and browns to create the spectacular show of the fall foliage, one of the tourist attractions which brings so many visitors to the highlands of West Virginia. Visitors are [...]

What Happens on Climate Next in DC? Your Guess Is as Good as Mine

By Perry Bryant             As of the first of October, the House of Representatives has delayed consideration of the bipartisan infrastructure bill. Speaker Pelosi did not have the votes to get it passed when Progressive Democrats indicated they would vote against it unless the Senate first passed the much larger $3.5 trillion Build Back Better bill, [...]

Time for the PSC to Protect WV Ratepayers

By James Van Nostrand Few cases better illustrate the abject failure of the West Virginia Public Service Commission to protect ratepayers than its approval last month of American Electric Power’s proposal to charge its West Virginia customers $383.5 million for environmental upgrades at its three coal plants in the state. The expenditures are necessary to [...]

Saying “Yes” to Saving Wonder by Mary Knight Reviewed by Cynthia Ellis What is the correct term for books for early teens these days?  Young adult?  Surely not Juvenile? Whatever it is, this is one.  And a pretty good one. Saving Wonder is the debut novel of Mary Knight.  She’s not from Appalachia.  But she gets it right.  Without [...]

Along with ghosts and witches, bats symbolize Halloween. They are mythologized as dark, threatening creatures in the night sky, waiting to swoop and get entangled in our hair and drink our blood. In reality, bats are timid, avoid human contact, and have a tremendously positive impact on our ecosystem. Bats are nocturnal mammals who can [...]

The Army Wants You

By Cory Chase Climate change is the elephant in the room with regards to environmentalism. It is undoubtedly one of the most pressing issues we face as a species on planet earth. Forests play an important role in combating this monumental challenge. A changing climate presents many challenges, but also many opportunities.  I recently attended [...] 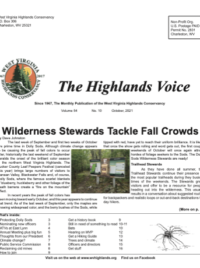