The United States Environmental Protection Agency has announced the repeal of the regulation defining the “waters of the United States.”  In doing so, it has removed protection for millions of miles of streams and many wetlands.  The streams affected are largely headwater streams or streams which do not have water in them year round.  Repealing this definition clears [...]

October and Mother Nature has started her annual coloring of the leaves. Conversations always drift to the annual question, how is the weather going to affect how brilliant the colors will be this year? No matter what, Mother Nature’s magnificent show will draw hundreds of thousands to West Virginia. Traveling to Dolly Sods, Blackwater Falls, [...]

The Antero-Clearwater facility has been temporarily idled while the company considers its “cost effectiveness.”  In public statements the company has said that the closure is not permanent but only while it evaluates the facility.  The facility is located near the Doddridge/Richie County line on Route 50 about midway between Clarksburg and Parkersburg, near West Union, WV. The [...]

By Hugh Rogers             Long-anticipated trails on the Mower Tract, 40,000+ acres on the western edge of Cheat Mountain that came into the Monongahela National Forest in the 1980’s, are welcoming hikers at last. On the Lambert Ponds and Lambert Overlook trails, see the Voice, July 2019. Now we have Hawks Ridge Loop Trail on the southern [...]

By John McFerrin The West Virginia Highlands Conservancy has joined with the Center for Biological Diversity, Sierra Club, and the Ohio Valley Environmental Coalition to sue the federal Office of Surface Mining (OSM) and the United States Fish and Wildlife Service for failing to protect endangered species from coal mining.  The groups contend that the agencies [...]

As a professional biologist, I am appalled at what’s happening to our river.              Not just scientists studying rare species, but those who enjoy fishing for trout, smallmouth bass, and catfish on the Roanoke River have a right to be concerned.  We’re talking here about the survival of the ecological pride of the Roanoke River Basin, the [...]

Conifer Conservation and Ecology in the Central Appalachians

October 18-20, 2019 Elk River Inn and Restaurant, Slatyfork, WV The Schedule Friday night 7:00 Meet and Greet: we will have light refreshments and the bar will be open. Good time for networking Saturday 7:00 am Birdwalk led by Jackie Burns. Join Jackie for an early morning look at the sights and sounds of nature, [...]

That’s West Virginia’s ranking among states for energy efficiency, as determined by the American Council for an Energy Efficient Economy.  We are actually tied with Louisiana for this spot.  This represents an improvement of one spot from the 2018 rankings; we achieved this by sitting still while North Dakota fell back by one spot.  The District of Columbia [...] 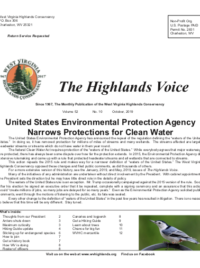