By John McFerrin The Fiftieth Anniversary celebration of the West Virginia Highlands Conservancy was that splendid combination of fun and opportunities to learn stuff.  We had a paddling trip, a couple of hikes, a trip to the Allegheny Front Migration Observatory (the longest continually operating bird banding station in the United States), a tree planting, [...]

Our 50th Anniversary celebration was a success! I was up in the pre-dawn of the day after; racing to type what I remember of a great weekend for the West Virginia Highlands Conservancy.  Hang on for a free-flowing account! Only a few scattered showers appeared as we unpacked and set up on Friday at the [...]

We wish to thank all who generously donated items to the Silent Auction at our 50th celebration.  Thanks for prints, pottery, books, snowshoes, and much more!  We gained about $900, thanks to you!!! [And one attendee was especially pleased to purchase these vintage mugs, made by "Conrad Crafters"---that is Chuck Conrad, a signer of the [...]

Some Things to Consider When Supporting Renewable Energy

By Wayne Spiggle One of the perks of serving on the WVHC board of directors is that from time to time we use email to exchange observations, opinions and information not on the agenda but contributive to discussion at board meetings.  Recently, we talked about Renewable Energy Certificates (RECs) and the conversation prompted our inimitable [...]

Judge to Appoint Special Master to Speed Up Coal Mine Cleanups

By Ken Ward Jr. A federal judge says he plans to appoint a “special master” in an effort to speed up the process of cleaning up water pollution violations related to a Fola Coal mountaintop removal operation along the Clay-Nicholas County line. U.S. District Judge Robert Chambers issued a ruling Wednesday afternoon that said he [...]

For the last few months we have been having a contest, designed to gather information for the upcoming 9th edition of The Monongahela National Forest Hiking Guide.  To enter, one had to hike a trail and then submit a report of trail descriptions, conditions, etc. for inclusion in the new edition. As part of our [...]

A Little Adventure in Birding

By John McFerrin The photograph which illustrated the story in the September Voice about the Brooks Bird Club and its 85th anniversary is of a Sutton’s Warbler.  In searching for a picture, I came across a story about a group of West Virginia birders who adopted as their mission a sighting of the Sutton’s Warbler. [...]

By Donna Weems   Once small, now muscular and strong Collins Run spills over wooded banks Rushing past rocks and soil, dank Loudly laughing as it hurries along   Dry gulley now an active streambed Clear water seeps through grass and moss From under logs and cracks in rocks The whole mountainside is its watershed [...]

West Virginia Near the Bottom in Energy Efficiency

The American Council for an Energy Efficient Economy is out with its 2017 State Energy Efficiency Scoreboard and, for West Virginia, there is good news and bad news.  The good news is that we didn’t finish last.  Unlike in most economic rankings, where we count of Mississippi to keep us out of last place, we [...]

Pipelines, Streams, and Wetlands: Will They Be Allowed to Cross? 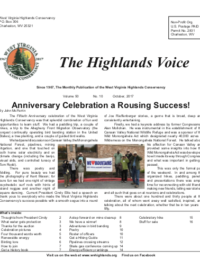