By Cindy Rank Last month’s Highlands Voice (October 2020) explained the legal challenge by WV Highlands Conservancy and seven co-plaintiffs to the recently reissued Army Corps of Engineers (ACOE) stream crossing permit for the Mountain Valley Pipeline to cross 1,000 streams along its 303-mile path through West Virginia and Virginia. In late October the same set of [...]

WOW, October was certainly the time for visiting the highlands that we all love. Traveling through the mountains, as many others that I passed along the way were doing, one could observe Mother Nature’s magical transition from summer to fall. I heard so many comments stating that this certainly was one of the best years [...]

The single-use plastics policy is an attempt to move upstream in the effort that the Conservancy has mounted in recent years to “monitor pipeline construction, well drilling and fracking to conserve and protect our mountains, valleys, and streams.” It is one thing to oppose a pipeline. It can be even more effective to reduce the [...]

While most of Monongahela National Forest is open year-round, closing only when access roads are snow-covered, some developed campgrounds, picnic areas and both visitor centers are routinely closed from late fall through mid-spring. Closing dates for recreation sites on the Cheat-Potomac Ranger District (304-257-4488) in the Petersburg and Seneca Rocks areas: Big Bend Campground – 10/31Dolly Sods Picnic [...]

What Would a “War on Coal” Actually Look Like?

By Mike Harman If you are leaning toward giving the accusations of the West Virginia Coal Association and Chamber of Commerce any weight whatsoever regarding “Obama's war on coal,” it would be instructive to examine a few facts. First of all, coal sales are down due to a reduced demand for electric power, which may [...]

By Ellen Knickmeyer President Donald Trump on Tuesday created what he called a “subcabinet” for federal water issues, with a mandate that includes water-use changes sought by corporate farm interests and oil and gas. An executive order from Trump put Interior Secretary David Bernhardt and Environmental Protection Agency Administrator Andrew Wheeler in charge of the [...]

The National Forest Mapping Project (NFMP) is a monitoring program to track proposed and ongoing projects in the three National Forests that are located within the Central Appalachian Highlands (Monongahela in West Virginia and George Washington and Jefferson in Virginia). The project is part of the Conservation Hub program of the Allegheny-Blue Ridge Alliance (ABRA).   [...]

On the ridges  and north sides  autumn’s trees  are just short of perfection.  One of the last tender winds is blowing maroon, yellow,  red, and orange  leaves asunder.  Hidden behind Lost Flats  giant wind turbines are spinning, at their base and surrounding them the strippers are stripping.  Amazing how many miles of paradise thirty men [...]

By John McFerrin It was a strange, pandemic warped Board meeting with us all sitting snugly at home, watching each other on our computer screens.  In spite of the oddness of the method and place (everywhere and nowhere) of the meeting, we still managed to learn some things and get some things done. Because of the [...]

By Dr. Christine Wimer, President Jefferson County Foundation  Why should large, wealthy corporations be treated like national parks? The short answer is they shouldn’t, but they are in West Virginia.  Payments in Lieu of Taxes (PILOT) are payments made by a state or the federal government to local jurisdictions in which the state or federal [...] 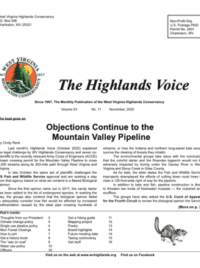