Thought from our president

October, just like every other month, has been very busy at the Conservancy and within the environmental community. With the Conservancy it was another wonderful Annual Fall Review, which once again was packed full of activities, October 18-20 at Elk River Inn and Restaurant https://elkriverwv.com/about-us/ in Slatyfork, WV.  Those of us who arrived Friday evening shared light [...]

By Cindy Ellis This little cautionary tale is not needed by those fighting the ACP and MVP.  Nevertheless, it might bolster the arguments that they use about pipeline impacts by noting the woes of folks in western West Virginia, where the 165 mile- long, 36- inch MXP has been in operation since March, 2019.  A number of [...]

Can the Appalachian Trail Block a Natural Gas Pipeline?

By Noah Sachs A note before you begin:  Noah Sachs is a law professor.  Law professors are like lawyers only more so.  There is a constant danger that they will veer off into jargon, law talk, or worse.  Fortunately, this story avoids those tendencies.  It is long by Voice standards but if you read it all the way through you will really understand [...]

Review by John McFerrin             The Compendium of Scientific, Medical, and Media Findings Demonstrating Risks and Harms of Fracking is a compilation of evidence outlining the risks and harms of fracking. It is a public, open-access document that is housed on the websites of Concerned Health Professionals of New York (www.concernedhealthny.org) and Physicians for Social Responsibility (www.psr.org).               While [...]

By John McFerrin The Board did the usual business, hearing largely unremarkable reports on our finances and membership.  We also heard several updates on things we are involved in and made some decisions. Frank Young reported the results of the process of the West Virginia Environmental Council’s legislative priority setting. It had solicited ideas both from [...]

A New Designation for the New River?

By Cindy Rank The word “April” brings to mind visions of a season of hope and transformation - awakening and new growth – increased light nudging the sleeping earth to rise up and face the new year and what awaits. ‘April’ Pierson-Keating embodied all of that – and more.  It was as if her naming [...]

The main item of business for the Annual Meeting of the West Virginia Highlands Conservancy, held on October 20, 2019, was the election of Board members.  Three of the previous Board members George Hack, Rick Webb, and Hugh Roger were re-elected to two year terms.        We did, however, elect a brand new Board member: Ellie Bell.  She [...]

Bill Reed, the gentle, kind, irascible, uncompromising curmudgeon who served as editor of The Highlands Voice from 1997 until 2002 (second longest tenure in Voice history) died on September 26, 2019, in Viola, Wisconsin.  He was 93.             Bill was born and raised in Connecticut in a family with three older siblings, and attended public schools there.  After high school he enlisted [...]

A Tour of the Atlantic Coast Pipeline

The major field trip of the Fall Review was the tour of a small part of the route of the Atlantic Coast Pipeline, led by Rick Webb and a team from the Compliance Surveillance Initiative.  After an introductory program at the Linwood Public Library, our caravan of seven vehicles made three stops, seeing what we could [...]

The United States Environmental Protection Agency has proposed a new rule that would restrict the role of states in approving projects under the federal Clean Water Act.             Under the federal and state Clean Water Acts, anybody who wants to undertake a wide variety of activities which have an impact upon water must have a permit.  These [...]

by Nelson Tinnel On a barren hill all alone clings a tiny oak  to a jagged stone The loggers came with wheel and claw No longer they use the axe and saw No more the horse with chain and hook with blade and claw the earth they took They stripped the land and scarred its [...] 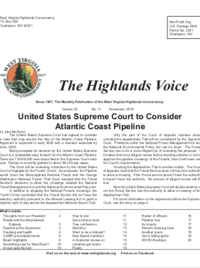