By Hugh Rogers The state Department of Environmental Protection (DEP) has issued a cease-and-desist order to Kokosing Company, which is building a 7.5-mile section of Corridor H in Tucker County. More than half passes through the Monongahela National Forest. It’s music to our ears: cease and desist! Stop tearing up the forest and dumping mud [...]

Thoughts from our president: Reviewing the review

Dear Members, This is a message – an abject apology - to our members who have recently renewed.  There was what I am sure was a frustrating problem, in that many of the business reply envelopes we intended as a service to our members were stuck closed.  Several members graciously used their own envelopes to [...]

The con at the heart of the Atlantic Coast Pipeline

By Robert Zullo It can’t be said enough, and it’s something that’s easy to lose sight of amid the labyrinthine legal and permitting debates around the Atlantic Coast Pipeline, which could be getting federal approval to start full construction in Virginia any minute now. The need for Dominion Energy’s 600-mile Atlantic Coast Pipeline is far [...]

By Dave Saville Twenty years ago, Highlands Conservancy members were concerned about the Balsam Woolly Adelgid and the exotic insect pest’s decimation of the balsam fir stands in West Virginia.  This genetically unique population of trees, at the southern edge of its range, has been a part of the forests of Canaan Valley and the [...]

The Circuit Court of Summers County, Judge Robert Irons, has now heard evidence and arguments concerning the Mountain Valley Pipelines and its Natural Stream Preservation Act Permit to cross the Greenbrier River.  As reported in the October issue of The Highlands Voice,plaintiffs claim that the crossing would be in violation of West Virginia’s Natural Streams [...]

Pioneers down the Gauley

The Charleston Gazetterecently had a story about a reunion of the group that first took kayaks and canoes down the Gauley River in 1968, including the part that is now under the dam.  It included a nod to Sayre and Jean Rodman: Walbridge kicked off the event by giving a brief account of the Gauley’s [...]

By Jean Rodman: The trip was run over the long Memorial Day weekend of 1961. It was cold. At one point it snowed on us. There were no easy roads down to the Gauley in those days. So, to drive from western PA, it took a 4-day weekend to even think about such a trip. [...]

It is altogether fitting that Jean Rodman’s last contribution to the West Virginia Highlands Conservancy was the story on the facing page, and that its last line was, “Last month I bought another canoe.”  That’s the way she was.  She died with her boots on, or at least nearby, close enough that she could quickly [...]

By John McFerrin The United States Forest Service wants to create and maintain habitat for Ruffed Grouse.  In order to do this, it has proposed its Spruce Mountain Grouse Management Area Project. The West Virginia Highlands Conservancy has commented on the project, generally supporting the project while having some reservations. The project is located west and [...]

By John McFerrin The October, 2018, gathering of the West Virginia Highlands Conservancy featured two meetings.  The first was the Annual Meeting, held once a year to elect officers and directors and conduct any other business that may come before the membership. The election of officers featured all the same drama and excitement that we [...]

Seeing the Sinks of Gandy 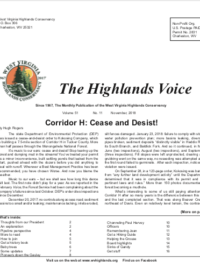