By John McFerrin In two decisions issued together (two pipelines, two decisions) The Federal Energy Regulatory Commission (FERC) has approved both the Atlantic Coast and Mountain Valley Pipelines.  The pipelines still need other approvals by state officials but, so far as FERC is concerned, the pipelines are approved. While not articulating it this way, the [...]

It seems as if there’s always a great deal that I want to learn about and share.  But sometimes different topics wrestle for my attention.  Mole Crickets pulled me one way.  But, secondly, in November, political reforms vied for my time too. Whoever heard of Mole Crickets?  Who could pass up trying to find out [...]

By John McFerrin Once again the rule that would both reduce emissions and increase revenue from gas produced on public lands has survived Congressional and Legislative efforts to kill it.  Last time it was the Senate to the rescue; this time it is a court.  For now, at least, the rule survives. The problem The [...]

This summer’s wildfires have focused attention on forest management practices that could make fires less devastating.  While there is widespread agreement that changes in forest management have that potential, this attention could also be an opportunity for those who seek to tilt management of the public lands toward more timbering. One of these attempts is [...]

In September the North Carolina Department of Environmental Quality has rejected the Atlantic Coast Pipeline’s erosion and sediment control plan.  While the rejection was a hopeful signal that the Department is taking its review duties seriously, it was far from a “hit the road, Jack, and don’t you come back no more, no more …” [...]

Office of the Governor State Capitol 1900 Kanawha Boulevard, East Charleston, West Virginia 25305   Honorable Governor Justice, There are, and have been a number of plans for new electricity transmission lines and natural gas pipelines in West Virginia.  The lines cross our beautiful mountains and damage our environment while exporting West Virginia’s valuable resources: [...]

Seen with the eye of contemplation, creatures are             vestiges, the very footprints of God.   -- St. Bonaventure A gray bird in a red bush, an empty stream of stones and brittle leaves, a chittering song sung, then followed by a silence that lifts up the sky, lifts the sky with an echoing that [...]

A Giant, and a Friend, Passes

Born in Watertown, Wisconsin, Dianne was the oldest of eight children that Josephine and John McFarland would bring into the world, followed by Jerry, Betty, Linda, Hannah, Monica, Dan, and Laura. Of growing up on a dairy farm, Dianne fondly recalled riding cows (and eventually horses) and picking asparagus at dawn before school (less fondly). [...]

Giving Thanks … for the 50th

By Cindy Rank A great big THANK YOU from the planning committee for the 50th Anniversary blowout at Canaan Valley in September. It was a lot of work, but great fun. It would be impossible to thank everyone individually without leaving someone out, but we want to at least mention and give thanks to the [...]

Through its Project Feeder Watch, the Cornell Laboratory or Ornithology has begun gathered data on what it calls “dominance hierarchy.”  This involves watching birds’ behavior at feeders and learning who’s got the 'upper wing' when it comes to competition at the feeder. Who gets displaced by whom? Is bigger always better? Do birds fight more [...]

Cancelling Study on Mining and Health: an Update

By John McFerrin For years, and probably decades, coalfield residents have known in their bones that living near surface coal mines made people sick.  This common knowledge began to be more focused in the early 2000s when more scientific studies began to appear documenting what people had long suspected to be true.  The Ohio Valley [...]

Asking the Governor for Help

Twenty organizations (including the West Virginia Highlands Conservancy) have joined in a letter asking Governor Justice to take the lead in assuring that the Atlantic Coast Pipeline and the Mountain Valley Pipeline do not degrade West Virginia’s waters. The Federal Energy Regulatory Commission has recently approved these two pipelines (see story on page 1).  This [...]

By John McFerrin The Board of Directors of the West Virginia Highlands Conservancy met in October.  Of course, we had most of the usual stuff—report from Membership Secretary (holding our own), report from Voice editor (wants articles), and report from Treasurer (nothing unusual).  We also had reports of great progress on the new Hiking Guide [...] 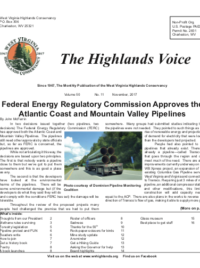