On Climate Change and the Arc of History

By John McFerrin Even if we are past February--the month of predictions, the month that opens with Groundhog Day when we all at least pretend to listen to the weather forecast of a rodent—it is still a good time to look at a previous prediction or, more precisely, an analysis of a trend noted by [...]

April has passed with over a full year of dealing with the restrictions associated with COVID-19, even though many have now received the vaccine. Although the coronavirus has many of us still hunkered down, Mother Nature is on the move. Spring has arrived in our mountains. In the valleys, trees are greening with this year’s leaves while [...]

Some Welcome (but far away) Relief for Birds

The Bird-Safe Buildings Act has been re-introduced in Congress.  It would require that new or substantially modified federal buildings be constructed to make them less of a hazard to migratory birds.               Each year between three hundred million and a billion birds die in collisions with buildings.  The idea of the Act is to reduce this by requiring [...]

By Cynthia D. Ellis Our editor prompted me to write about what is new with the MXP…the Mountaineer XPress Pipeline…that mega pipeline that slashed through 14 counties in western West Virginia.  He knew that I live about ½ mile from a portion of the 167-mile-long line and maintain a special interest in it.   The answer [...]

The West Virginia Highlands Conservancy Dolly Sods project is getting close to the point where we can begin calling for volunteers for the first phase of activity, which will be educating visitors at trailheads about wilderness principles and Leave No Trace practices. Look for an announcement and details about signing up in early to mid [...]

It must be spring; the woodpeckers are drumming.        Woodpeckers make two distinct types of sounds.  One is the irregular pecking, with a couple of thumps, a moment of silence, and then a few more pecks.  These are the working sounds; the woodpeckers make them when they are looking for bugs or excavating a nesting cavity.  The pauses come [...]

By Rick Webb The candy darter is a brightly colored 2 to 3-inch fish of mountain streams in the Gauley and New River watersheds of Virginia and West Virginia. Streams that maintain the habitat requirements of the candy darter are now mostly limited to the upper reaches of its former range in relatively undisturbed forested [...]

Tree buds a bloomin Spring is a zoomin To turn the world green The leaves will be poppin There just ain’t no stoppin That photosynthetic scene Tree roots are a suckin Ground water that’s been truckin From the surface down into the ground Sap’s been a climbin Up tree trunks for primin Tiny leaves that [...]

By Perry Bryant             In late March, President Biden proposed an infrastructure initiative that included major provisions addressing the climate crisis. Central to the President’s proposal on climate reform is a clean energy standard requiring electrical utilities to generate with 100 percent clean energy by 2035. Clean energy are energy sources that do not emit carbon [...]

Methane is a powerful greenhouse gas, trapping heat in the atmosphere 30 times greater than carbon dioxide over a 100-year time frame. But unlike carbon dioxide that can impact the atmosphere for hundreds of years, methane breaks down in about a decade. That means reductions in methane today will have climate benefits in 2031, something [...]

New Climate Goal for the US, Will Others Follow?

On Earth Day, President Biden announced a new United States goal for meeting our obligations under the Paris Climate Agreement. The United States will reduce its carbon dioxide emissions by 50 to 52% by 2030. Regretfully, China and India, the world’s largest and third largest emitters of carbon dioxide, did not announce new goals for [...]

By John McFerrin             Once again the Board members (and a couple of their cats) climbed into their little Zoom boxes for the quarterly Board meeting.  We are thinking that this may be the last Zoom Board meeting for a while and that it may be safe to meet in person at the next one, scheduled for [...]

WV Legislature- Win Some, Lose Some

By WVHC & WV E-Council legislative committees              Sort of like a high stakes poker game, the fate of environmental related bills in the West Virginia State Legislature is both chancy and sometimes unpredictable.  In the just ended 2021 legislative session, WV Environmental Council (WVEC) lobbyists scored a couple wins where most odds-makers would have predicated losses. [...] 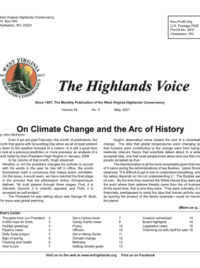