Last month Randy Kesling updated you on the continuing saga of the pump storage project proposed by FreedomWorks, LLC for the Big Run area of Tucker County. You may recall that the Forest Service rejected FreedomWorks’ application for a Special Use Permit (SUP) to conduct feasibility studies on National Forest land due to the inconsistency of [...]

The mountains received some severe windy and rainy weather during March and April. Driving through the mountain’s unpaved roads you can see the evidence in the form of numerous potholes, significant erosion and downed trees that have been cut back to allow vehicles to pass. It appears that the same weather patterns will continue into [...]

By Cindy Ellis Recently I joined volunteers who wanted to know more about living beings in West Virginia’s waterways. Fifteen of us gathered on the banks of Davis Creek in Kanawha State Forest on a mild spring day to learn about flipping rocks and finding what lies beneath. We plunged into our lessons and were [...]

By John McFerrin The West Virginia Highlands Conservancy, along with the West Virginia Rivers Coalition and several other groups, has commented on the latest proposal to restrict the coverage of the federal Clean Water Act. If the proposed restrictions become final, it will result in a loss of protection for most headwater streams and many wetlands [...]

How Stands the Atlantic Coast Pipeline?

By John McFerrin The West Virginia Department of Environmental Protection (DEP) has changed the conditions that are placed on permits for stream and wetland crossings for natural gas pipelines. Background Under the federal and state Clean Water Acts, anybody who wants to cross a stream or a wetland must have a permit.  It has a [...]

By Steve Mace This past Sunday while I was botanizing in Lawrence County, Kentucky, I spotted my first of the season Falcate Orangetip, my favorite butterfly. The life history of this species is as interesting as it is beautiful. Thirty-eight of the last 40 years of my life was spent in Mason County, West Virginia [...]

Still in Need of Something to read?

The Central Appalachian Red Spruce Initiative.  (West Virginia Highlands Conservancy is a partner in CASRI) was an important part of a feature article in the Energy and Environment News.  The entire story is way too long to reprint here.  To see the whole thing, go to https://www.eenews.net/stories/1060140777        The story is a good read not [...]

National Institute for Occupational Safety and Health (NIOSH) (a part of the Centers for Disease Control and Prevention (CDC)) wants to build a facility that it could use for studies and research on mine explosions, mine seals, mine rescue, ventilation, diesel exhaust, new health and safety technologies, ground control, and fire suppression.  It would like [...]

Big Fun on the Horizon!

The Broad Form of the Company’s Deeds

By Dave Cooper Recent articles in The Highlands Voiceabout the proposed Big Run Pump Storage project in Tucker County written by Kent Karriker and Randy Kesling have been both interesting and informative. Here is a little more background and history about pump storage for those wanting more information. In 2005, in the midst of the [...]

The spring Board meeting of the West Virginia Highlands Conservancy was more informational than decisional.  We had the usual presentations on the status of the organization:  financial (not broke; not flush either); membership (stable); webmaster (good shape). In the President’s report, Larry talked about some of the things he has coming up. On May 4 [...]

By John McFerrin On April 10, 2019, President Trump signed the Executive Order on Promoting Energy Infrastructure and Economic Growth.  Its goal is to speed up the construction of oil and gas pipelines. The first section of the Order sets out its purpose. It is nothing that anyone who has listened to President Trump and his [...] 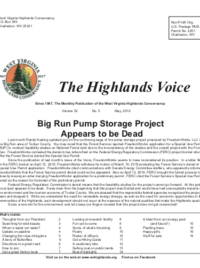