By John McFerrin             From the project’s beginning the West Virginia Highlands Conservancy has opposed Corridor H.  Even when it was only an idea--with nothing on the ground—we thought it was a bad idea, a big slice across the highlands that would be destructive but of little benefit.   In Fighting to Protect the Highlands: The First Forty Years [...]

February continued the onslaught of freezing temperatures and strong winds (causing wind chills to drop below zero), along with snowstorm after snowstorm blanketing most of the highlands in a wintry wonderland.  Unfortunately, Punxsutawney Phil saw his shadow and predicted six more weeks of winter.  A flurry of activities also continued a flurry of activities as we continue our efforts to [...]

By Kent Karriker The Monongahela National Forest has proposed to conduct over 2,600 acres of timber harvest and several hundred acres of prescribed fire on the Gauley District near the town of Richwood.  The project is called the Gauley Healthy Forest Restoration project, or GHFR for short (see the brief summaries in Larry Thomas’ president’s column [...]

By Perry Bryant             In a recently released report the National Academies of Sciences, Engineering and Medicine (Academy) recommends that the United States adopt a modest carbon tax, use clean energy standards and energy efficiencies measures, as well as adopting other policies, in order to achieve net-zero emissions in the U.S. by 2050. Net-zero emissions means [...]

By John McFerrin             Now we have a few more data points in the ongoing effort to determine if groundhogs really can predict the weather.  Punxsutawney Phil—the national groundhog by virtue of his cinematic career and superior public relations efforts—predicted six more weeks of winter.  In West Virginia, however, both of our groundhogs—Concord Charlie and French Creek Freddie—predicted an [...]

WVHC, now in its 54th year, currently serves approximately 1,500 members and supporters with a strong history of promoting, encouraging, and working for the conservation and an appreciation of the natural resources of West Virginia focusing primarily on the Highlands Region. Protecting clean air, clean water, forests, streams, mountains, and the health and welfare of the people that [...]

By John McFerrin For the latest of what seemed like too many times in a row we gathered in our little Zoom boxes to take care of the West Virginia Highlands Conservancy’s business.  Some of the meeting was uneventful with people saying things such as, “we did stuff; read about it in the Voice.”  While that was routine, [...]

From The West Virginia Hills

Ever wonder what’s the best way to offset your carbon footprint? There’s a website for that

There are a number of places on the Internet where you can purchase “carbon offsets” by planting trees or other activities to take out of the atmosphere as much carbon dioxide (CO2) as you are responsible for putting into the atmosphere. Giving Green (www.givinggreen.earth) a nonprofit organization has rigorously investigated organizations that claim to provide [...]

Through Our Native State

By Lenore Coberly We drive down the Little Kanawha late in life, enfolded by green hills in spring leaf, at speed limits forty on curves, a constant in these parts.  At Dolly Sods we climb to see calypso orchids in deepest red and boulders piled across the top, the  heart of the world's oldest mountains [...]

A monthly publication such as The Highlands Voice is a lousy place to get legislative news.  This early in the session things change day to day.  Later on, they will be changing minute to minute.  With that understanding, here are some things that are going on (or not going on) in the West Virginia Legislature: Oil and gas tanks             When [...] 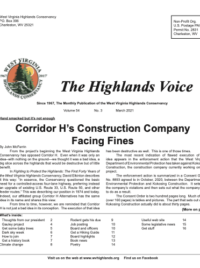