The United States Senate has permanently authorized the Land and Water Conservation Fund. Both Senator Capito and Senator Manchin supported the Fund. The Fund collects revenue from offshore drilling and uses it to fund major national parks and wildlife preserves, as well as local baseball diamonds and basketball courts. For more background on the Fund, [...]

The Land and Water Conservation Fund (LWCF) was created by Congress in 1965.  It represented a bipartisan commitment to safeguard natural areas, water resources and our cultural heritage, and to provide recreation opportunities to all Americans. National parks like Rocky Mountain, the Grand Canyon, and the Great Smoky Mountains, as well as national wildlife refuges, [...]

Mining and Public Health: Congress Wants to Know What Happened

By John McFerrin The Natural Resources Committee of the United States House of Representatives has renewed its interest in the connection between strip mining and public health and why the United States Department of the Interior suddenly stopped a study of the connection.  Its Chairman and the Chair of the Subcommittee on Energy and Resources [...]

By Patty Gundrum Two orchids are evident in West Virginia during the winter.  Putty Root (Aplectrum hyemale) and Cranefly Orchid (Tipularia discolor) produce a single leaf in autumn which persists all winter. The leaves of both orchids are more conspicuous than the flowers.  Putty root produces an elliptical and wrinkled green and white striped leaf [...]

By John McFerrin The West Virginia Highlands Conservancy has joined with three hundred other organizations in opposing a proposal by the United States Environmental Protection Agency to reduce its oversight of the issuance of “dredge and fill” permits. Although the rule would apply to all EPA decisions, in West Virginia it would have the greatest [...]

The United States Court of Appeals for the Fourth Circuit has refused to rehear the case which disapproved of authorizations the Atlantic Coast Pipeline had received to cross the Appalachian Trail and the Monongahela and George Washington National Forests. There are fifteen judges on the Court.  Typically only three hear each case.  When a litigant [...]

There was a lot of activity at the West Virginia Legislature.  The end of the session is only about a week away.  Everything is changing so quickly that nothing written now will be accurate by the time the Voiceis printed and mailed. Instead of including anything about the Legislature this time we will wait until [...]

A new study suggests that trees are our most powerful weapon in the fight against climate change.  Massive restoration of the world’s forests would cancel out a decade of carbon dioxide emissions. In the past, scientists had assumed that there are fewer trees in the world than there actually are.  Ecologist Thomas Crowther and his [...]

By Dave Cooper I was saddened to read in the February 6 Lexington Herald-Leader that the Enerblu battery plant project proposed for Pikeville in eastern Kentucky has fallen through.  In the article “Enerblu suspends plans for hundreds of jobs in state,” by Will Wright and Bill Estep, the company press release noted a “series of [...] 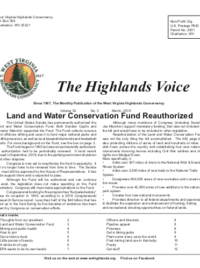