Proposal to Timber in State Parks Dead (we think)

As The Highlands Voice goes to press the proposal to timber in West Virginia’s State Parks is almost certainly dead.  What began as a rumor reached the status of conventional wisdom and even had a Senator issuing a statement announcing its death. ”Crossover day” came and went without action.  Crossover day is the deadline by [...]

A Bad Idea Bites the Dust

By John McFerrin For years, if not decades, persons in the know about the West Virginia Legislature have been offering the observation that “fat possums run late.”  For a while it was attributed to some early legislative leader.  From there it was quoted and repeated so many times that, at least as early as 2012, [...]

The Appalachian Gas Working Group invites grassroots groups, organizations, activists, and socially conscious folks who are interested in efforts to end public harm from oil and gas extraction, and its growing infrastructure, to attend our Community Organizing Summit, April 6-8, in Weston, WV. The goal of the Community Organizing Summit is to empower and strengthen [...]

Curious about all the fracking, pipelines, and the fracked gas liquids storage hub/petrochemical complex proposed for our area? Then come to this public meeting! We will have short films, speakers, and a public discussion concerning the fairness of the use of our natural resources, and how massive Oil, Gas, and Petrochemical development will affect average [...]

There is currently a bill in the West Virginia Legislature (SB 498) which would establish a pilot project to allow all terrain vehicles in Cabwaylingo State Forest.  As of press time it had passed the Senate.  It has also passed the House Committee on Agriculture and Natural Resources. It is currently pending in the House [...]

By Beth Little The Atlantic Coast Pipeline could not be built through the Monongahela National Forest without violating the law, so the law has been suspended. I will explain. I say “suspended” because the amendments to the forest’s Land and Resource Management Plan included in the permit issued by the Forest Service are “project-specific plan [...]

By Frank Young As this is written we are but 8 days from the end of the WV legislature’s 2018 regular session.  At this stage if things move at all they usually move quickly.  A monthly publication such as the Highlands Voice is, at best, always playing “catch up” with the state legislature. It can [...]

By Rick Webb, Chair, Pipeline CSI, Allegheny-Blue Ridge Alliance Construction of the proposed Atlantic Coast Pipeline (ACP) presents an extreme risk to water and other environmental resources. We cannot solely rely on government agencies to reliably monitor, prevent, or even document the damage. The Allegheny-Blue Ridge Alliance and member organizations have therefore developed the Pipeline [...]

On November 28 and 29, 2017, the United States Environmental Protection Agency held a public hearing in Charleston on the repeal of the Clean Power Plan.  To read all about it, see the December, 2017, issue of The Highlands Voice.  At the time, this was to be the only public hearing on the proposal to [...]

The Lure of Flat Land

By John McFerrin Even if West Virginians are called Mountaineers, have we been lured by the idea of flat land?  Were we so charmed by the promise of flat land that we were lured into questionable decisions about how we treat our mountains? The earliest West Virginians—or at least the earliest European ones—certainly were drawn [...]

By Jackie Burns Imagine you are a duck on migration.  Flying high overhead, the view is great.  But it is getting to be time to rest and feed, so you are looking for a place to stop.  Ahead you see a reflective pond.  Looks like a good place to land.  Just as you’re landing you [...] 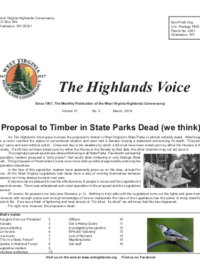