A Bear Was There

Donna Weems September 14, 2016 The dry spell has lingered Moisture from the soil is gone The goldenrod wilts, yellow flowers still brilliant on their drooping stalks The odd torrent of rain from a stray thunderhead runs off the surface Worms, salamanders, sow bugs and beetles move with the retreating moisture under large rocks and [...]

In preparation of its evaluation of the Atlantic Coast Pipeline, the Federal Energy Regulatory Commission (FERC) has preparead a Draft Environmental Impact Statement (DEIS) for the Atlantic Coast Pipeline.  This Draft EIS gathers together all the environmental information which FERC believes is relevant to its decision on the pipeline.  It is currently only a draft, [...]

By John McFerrin Congress is considering and, Congress being Congress these days, probably will take an action that will be a step back in both efforts to curb greenhouse gases and in efforts to make the federal government solvent.  It is considering voiding a rule designed to prevent the waste of natural gas on federal [...]

By Hugh Rogers Winter is shrinking.  On President’s Day, the snowdrops popped up, looked around, saw no snow, not even remnants.  We’ve used a few of these warm days to answer questions that came up as we worked on a 9th edition of the Monongahela National Forest (MNF) Hiking Guide.  This month’s installment of Trail [...]

An Old, Timely Word from Julian

The coal interests take our coal almost free of taxes. They pollute our air and streams and seduce our politicians. Coal barons don’t build anything more lasting and beautiful than a rusted out coal tipple or a mountain top stripped bare of its natural beauty. They ask us to consider them our number one asset.—Julian [...]

Ken Ward Jr. Less than two weeks after taking office, Gov. Jim Justice’s administration quietly deleted permit language intended to protect residents in West Virginia’s natural gas regions from excessive noise and bright lights from compressor stations and other facilities that are springing up across those communities. On Jan. 27, the state Department of Environmental Protection removed [...]

In Marble Halls: Our History with E-Council

By Cynthia D. Ellis One poem.  Thanks to an interest in one poem, I stumbled upon Tennessee State University’s “Now & Then; The Appalachian Magazine” ---a publication of that school’s Center for Appalachian Studies and Services.  And through them I acquired several archive copies of their magazine. One was the Spring 1995 issue with the [...]

Contrary to what many believe, Mountaintop Removal and other large scale mining has not disappeared from southern West Virginia.             Ask the brave folks at Coal River Mountain Watch (CRMW) and they will tell and show you how Mountaintop Removal still haunts their hometowns and communities in Boone and Raleigh Counties.             Below is a [...]

By Cindy Rank In June 2013 eighteen state and national public interest groups including, the West Virginia Highlands Conservancy, filed a petition with the federal Office of Surface Mining (OSMRE) claiming that the state of West Virginia failed to meet its mandatory duty to properly regulate coal mining operations and sufficiently protect the environment and [...]

HIGH-RISK DRILLING THROUGH THE BLUE RIDGE

By Rick Webb The Dominion Pipeline Monitoring Coalition has submitted a report to Federal Energy Regulatory Commission on the Draft Environmental Impact Statement (DEIS) for the Atllantic Coast Pipeline (ACP) and the proposal to drill through the Blue Ridge Mountains under the Appalachian National Scenic Trail, the Blue Ridge Parkway, and the George Washington National Forest. The [...]

After fifteen years in the making, the “stream protection rule” lasted about a month in effect. According to the official press release, the new rule “updates 33-year old regulations and establishes clear requirements for responsible surface coal mining that will protect 6,000 miles of streams and 52,000 acres of forests over the next two decades, [...]

Each month in The Highlands Voice, and on our website, we offer for sale a variety of t-shirts, hats, etc.  For the offerings in the Voice, we are fortunate to have a variety of models for our offerings of infant and children wear.  If nothing else, it gives readers a monthly shot of adorableness.  Even [...]

By John McFerrin The United States District Court has ruled that West Virginia was lax in its duty to beginning cleaning up impaired streams and that the United States Environmental Protection Agency has violated federal law by not requiring West Virginia to be more diligent. How the Clean Water Act works The goal of the [...]

The West Virginia Legislature is actively considering a bill (HB 2506) that would weaken West Virginia’s water quality protections. It would do two things.  First, it would change how compliance with standards is determined.  Compliance with a standard is determined by measuring the amount of pollutant that is in a given volume of water in [...]

What is The Cost of Subsidies?

By Larry V. Thomas Senate Bill 16 (SB16), proposing to repeal West Virginia Code Section §11-6A-5a has been introduced in the legislature and is making its way through the House, Energy, Industry and Mining Committee. SB16 proposes to repeal the statute that sets up a salvage value tax benefit to owners of industrial wind turbines [...] 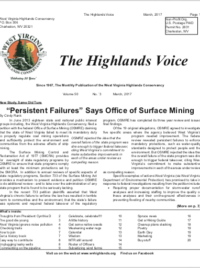