By John McFerrin             The United States Court of Appeals for the Ninth Circuit has refused to stay the effectiveness of the District Court’s decision that voided Nationwide Permit 12, the permit that authorized stream and wetland crossings by utilities (including pipelines). This means that the decision voiding Nationwide Permit 12 remains in effect while the [...]

May was yet another month of dealing with the restrictions associated with COVID-19. However, we are seeing states relaxing the restrictions that have kept us homebound for so long. If Memorial Day weekend was any indication, people were really moving around, most likely just wanting to get away from being hunkered down for so long. [...]

By Cindy Ellis Crawdads.  In recent years, these critters have been featured in quite a few stories and references in The Highlands Voice.  So, here is one more. This spring, veteran member and Department of Environmental Protection retiree Doug Wood shared the news that he had found a blue “mudbug” on his own property in Putnam [...]

Nudging the Greenbrier Southeast Project in the Right Direction

By Cindy Rank How well I recall quietly celebrating with a heart full of joy my 30th birthday on the side porch of the cabin we were building on our newly acquired little piece of almost heaven in southern Upshur County. But, oh how my head hurts and my heart breaks after some 47 years to [...]

The West Virginia Environmental Council (WVEC) seeks a part-time outreach coordinator and interim lobbyist. Qualified applicants would have familiarity with West Virginia’s legislative process and would represent the WVEC at all interim sessions of the state legislature including committee meetings and floor sessions. Strong communication skills are needed as the position requires direct interaction with [...]

Triple Threat to the Tygart

By Jack Slocumb             In her recent book, Wanderlust: A History of Walking, Rebecca Solnit asserts that “-- -walking focuses not on the boundary lines of ownership that break the land into pieces but on the paths that function as a kind of circulatory system connecting the whole organism. Walking is, in this way, the antithesis of owning. [...]

In response to a lawsuit from the Center for Biological Diversity, the West Virginia Highlands Conservancy, the Sierra Club, and the Ohio Valley Environmental Coalition, the Office of Surface Mining Reclamation and Enforcement has agreed to consult with the U.S. Fish and Wildlife Service by October 16 to review the impacts of coal mining across the [...]

Now a treasure, Monongahela Forest was a wasteland when created 100 years ago

By Rick Steelhammer Staff writer Stretching across 921,000 acres in 10 West Virginia counties, the Monongahela National Forest encompasses the state’s highest peaks, cleanest streams, largest expanses of forest and most remote tracts of wilderness. Now the second-largest national forest in the Eastern United States, the Mon draws visitors from across the region to hike [...]

Eight Rivers Council, an organization that focuses on improving the land, water and air of Pocahontas County, West Virginia through community action and education, offered an award of $1000 for the best essay entitled “How I might contribute to saving the planet starting in Pocahontas County.”  The award was available to Pocahontas County residents of high [...] 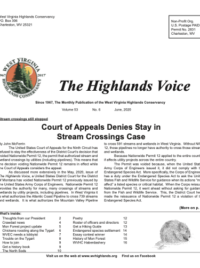