By John McFerrin The West Virginia Highlands Conservancy, along with the Sierra Club, the Center for Biological Diversity, and Ohio Valley Environmental Coalition have sent a notice of intent to sue to the United States Fish and Wildlife Service, the U.S. Office of Surface Mining and the West Virginia Department of Environmental Protection informing those agencies [...]

The Fernow Experimental Forest is 85! During 2019, the Fernow Experimental Forest (Fernow) is celebrating its 85th anniversary. Established March 28, 1934 to address water quantity, water quality and timber quality issues,forest health and clean water are still a focus, but 85 years later, data from the Fernow are also contributing to issues that were [...]

By John McFerrin The West Virginia Highlands Conservancy has joined with the West Virginia Rivers Coalition and other groups to comment on regulations on how West Virginia determines how clean streams have to be.  The whole process is arcane but important. It is settled, both as a matter of law and of public expectations, that [...]

An Appreciation of ‘Possums

By John McFerrin Opossums—those not especially cute, often seen as road kill creatures—are now being recognized as the nemesis of another not cute, not cuddly creature.  They eat ticks.    Ticks have never been contenders for the title of anyone’s favorite wild beast.  Their practice of blood sucking did little to endear them to humans.  When [...]

Plugging Old Gas Wells: Small Steps Forward but Not There Yet

By David McMahon Orphaned oil and gas wells have always been a problem. Wells need to be plugged at the end of their useful lives to prevent oil and gas and surface pollution from leaking into groundwater and onto the surface and into the air.  The very existence of these wells and the threat of [...]

Another side of Porte Crayon

We are all familiar with Porte Crayon (pen name of David Hunter Strother) for his iconic drawings of what is now the Monongahela National Forest and nearby lands. There is a peak named for him there as well as a trail. Drawings of peaks and forests were not, however, his only interest. For an idea of [...]

Pollinators in the Environment

By Sam Golston, Master Beekeeper Most of us are oblivious to insects and consider them a nuisance.  We try to eliminate them from our surroundings.  As a Beekeeper for over thirty years, I have observed what I consider the most important insect and that is the honeybee.  The media has educated us as to its [...] 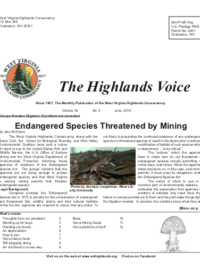