Another Delay for the Atlantic Coast Pipeline

By John McFerrin The United States Court of Appeals for the Fourth Circuit has ruled that the Incidental Take Permit for the Atlantic Coast Pipeline is void because the limits set by the Fish and Wildlife Service’s Incidental Take statement are “so indeterminate that they undermine the Incidental Take Statement’s enforcement and monitoring function under [...]

In addition to providing an abundance of rain, May has produced a flurry of information that will be of interest to West Virginia Highlands Conservancy members. Information includes:   Monitoring the Atlantic Coast Pipeline Rick Webb, WVHC Board Member and Committee Chair of the Pipeline Compliance Surveillance Initiativeof the Allegheny-Blue Ridge Alliance (ABRA) has provided [...]

Our efforts made the Nature Conservancy addition possible

By George E. Beetham Jr. This story begins in 2002 when a notice appeared in the Grant County Press about a wind farm that was to stretch from well north of Route 42 along the Allegheny Front to scenic Stack Rock, which is part of the Nature Conservancy's Bear Rocks Preserve. After reading it I [...]

By Frank Young The WV Highlands Conservancy has endured for more than a half century.  For an organization operated almost exclusively by volunteers, many “professionals” in non-profit organizational management training would have long ago written off WVHC as based on an unsustainable operating model. WVHC’s operating model has been one of management of volunteers and [...]

By Jackie Burns Ah Spring.  The days get longer.  The birds sing sweetly.  And the woodlands come alive with color as wildflowers bloom. You probably know that woodland wildflowers sprout and grow early, before the leaves come out on the trees, while sunlight is still able to reach the forest floor. Different areas will have [...]

Ready to take your public lands activism beyond writing letters to decision makers? Ready to inspire others in your community to act? You’re ready to be a West Virginians for Public Lands volunteer leader. We have a fun daylong training to get you there. Whether you are new to volunteering or you are already a conservation [...]

In April, 2018, the Board had a day long, facilitated discussion on the future of the organization, how we might change and adapt, etc.  For more on the discussion, see the story of p. 8 of this issue. As part of that discussion, Board members were asked to articulate why they joined.  Here are some [...]

Mountain Valley Pipeline to Get Closer Scrutiny at Stream Crossings

By John McFerrin             Because of Court and Agency action, the developers of the Mountain Valley Pipeline (MVP) may not be able to use an anticipated shortcut in getting approval for its crossings of four major streams and 587 smaller streams and wetlands in West Virginia. Background Activities such as filling a stream or a [...]

By Drew Philp Way out in the Appalachian hills, on the line between Virginia and West Virginia, after an hour-long backwoods hike up Peters Mountain, an orderly clutch of tents were surrounded by a plastic yellow ribbon that read, “police line do not cross”. Past that, a woman sat on top of a 50ft pole. [...] 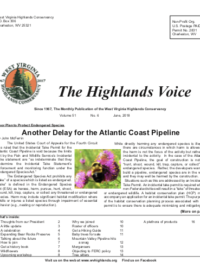