By Cindy Rank It is never pleasant living near any kind of coal mining operation and the smallest mines can cause health and property damage. However, the scale and location of the big mountaintop removal and other large scale surface mines and surface mine complexes approved since the early1990s have expanded exponentially and so has [...]

By Cynthia D. Ellis An anniversary year calls for taking stock of where we are---and who we are.  We could be inclined to wonder about the state of our group.  We might want to look in the mirror. We believe that we are doing well.  And if it is not possible to hold up a mirror to see [...]

From Fighting to Protect the Highlands, The First Forty Years of the West Virginia Highlands Conservancy by Dave Elkinton As recalled by Maxwell Smith  “It was a cold, wet, miserable day; however the attendance of 350 to 400 persons far exceeded our hopes.  After the day’s activities there was an evening meeting at Gatewood Management [...]

By Cindy Rank What fun it was a couple of weeks ago to return to the first bit of land purchased as part of the Canaan Valley National Wildlife Refuge (CVWR) in Tucker County. And what a difference 23 years makes! I’m embarrassed to admit I’ve not been back to the Freeland tract since it [...]

Beauty is Where You Find It

By Charlie Feldhake I have left the 12-foot bole of a dead scarlet oak standing about 20 feet from the back of my house.  Leaving it stand is not a popular decision since I live on the edge of a housing development and some sanitized version of healthy ecosystems is expected.  However, my back yard [...]

Legislature Does Good by Accident

There were two water quality bills in the 2017 Legislature which the West Virginia Highlands Conservancy opposed.  This led to weeping, wailing, gnashing of teeth, etc., some of which was expressed in the May issue of The Highlands Voice.  When the dust cleared, however, lawmakers discovered that when they passed the second bill (removing a [...]

We are working on a new edition of The Monongahela National Forest Hiking Guide.  To do it, we need your help.  The Guide describes nearly 200 U.S. Forest Service trails (800 miles total).  Inevitably, some have changed since our last edition was published ten years ago.  Do you know of trail descriptions in the 8th [...]

By Hugh Rogers Ever-resourceful Editor John has proposed a contest for hikers who will help us bring our Monongahela National Forest Hiking Guide up to date. Here’s some background. More than ten years have passed since our 8th edition came off the press. Many changes have affected the trails, and hikers’ experience, since 2006. First, [...]

Congress Refuses to Unfix a Problem

By John McFerrin In March, 2017, The Highlands Voice reported that Congress was about to unfix a problem with the waste of natural gas on public lands.  The Bureau of Land Management had done regulations to correct the problem.  There was, however, a resolution in Congress to prevent the regulations from taking effect.  It zipped [...]

Memories of the Early Days of the WVHC

By Rupert Cutler I was an Assistant Executive Director of The Wilderness Society in Washington, D.C., assigned by Executive Director Stewart Brandborg to help pro-wilderness grass roots groups in the eastern states, when the West Virginia Highland Conservancy was created in 1967.  It was my good fortune to fall in with the crowd that became [...]

By Beth Little I just witnessed an operation that has it all:  job creation, land restoration, and youth education.  The jobs are largely local and varied, from bulldozer operator to tree planting grunt.  The restoration is of old strip mined lands on Cheat Mountain, and the youth this day were students from colleges and universities [...]

Honoring the Partnerships that formed the Highlands Conservancy in the first place and the ever expanding network of new citizen and environmental partners we’ve worked with through the past 5 decades. Program Tentative - Details are still being finalized Friday, September 15, 2017 Noon – Registration and Display set-up begins 1:00pm – Outings organize for [...] 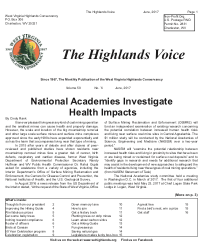