By Dave Johnston With the signing of a partnership agreement between the West Virginia Highlands Conservancy (WVHC) and the Monongahela National Forest (MNF), the long-planned project to address the impacts of increased visitation at Dolly Sods Wilderness is off the ground. Under the partnership, dubbed Dolly Sods Wilderness Stewards, WVHC will provide volunteers for activities [...]

Summer has arrived and during June there were many severe storms with heavy rains here in the highlands. It is fantastic to see the transition of the trees that have leafed out in their different shades of green, wildflowers blooming everywhere in so many colors and wildlife mothers (birds and animals) raising a new generation, [...]

By Jeff Witten and West Virginia Highlands Conservancy Climate Change Committee WV Mountaineers are resourceful and resilient: “Ask not what others can do to slow climate change - ask what YOU can personally do.” Good news, since 2007 total U.S. greenhouse gas emissions have steadily decreased; progress has been made.  A small increase in 2018 and [...]

By Cindy Rank Failing to get approval of the more general Nationwide 404 Clean Water Act permit to allow Mountain Valley Pipeline’s (MVP) stream crossing activities, the company has reapplied for permission via the more exacting individual permit procedure which requires not only approval from the Corps, but also requires the state to certify that [...]

By Cindy Rank In 2011 the WV Highlands Conservancy and WV Rivers Coalition successfully sued the state regulatory agency, WV Department of Environmental Protection (WVDEP), to require them to assume responsibility for treating water at a number of bond forfeiture sites across the state. One of those sites was the Greendale site in Clay and [...]

The Second Atlas of Breeding Birds in West Virginia, Edited by Richard S. Bailey and Casey B. Rucker

Reviewed by Cynthia D. Ellis It’s here!  The long awaited second edition of the West Virginia Breeding Bird Atlas has arrived!   Since the first ever breeding bird atlas in the world was published in England in 1970, West Virginia birders have known they wanted to census our birds too---to survey what species nest here and in [...]

Maury Johnson, Hero from the Holler

By Cynthia D. Ellis There are many different ways of taking action to protect the West Virginia mountains.  We may know of the quiet work of those who labor at their computers and phones, and then too we know of the more readily visible volunteers who help with protests, marches, and actions of every kind.  Larry Gibson [...]

Commenting on the Mountain Valley Pipeline

Before the Mountain Valley Pipeline would be allowed to cross streams or wetlands in West Virginia, it would need a permit from the United States Corps of Engineers.  It had hopes that it could quality under what is called a Nationwide Permit.  This is a one size fits all approach in which all stream or wetlands crossings.  The [...]

By Hugh Rogers             Less heart for long walks, more thoughts of walks taken. Some short quotes at the end of Duncan Minshull’s anthology, Beneath My Feet: Writers on Walking, have tickled my memory. They might do the same for you. It is good to collect things, but better to go on walks. --Anatole France             Highlands Conservancy-sponsored [...]

By Cindy Rank For those who knew Ben Stout, or worked with him, or heard about him, or read some of his research or court testimonies about the value of headwater streams and healthy water, here’s a bit of happy news – something we can all use these days. On June 18th family and friends gathered [...]

By Dan Shaffer  In August of last year, shortly after the cancellation of the Atlantic Coast Pipeline, the Allegheny-Blue Ridge Alliance (ABRA) announced the launch of a new program: the Conservation Hub. Building on the experience and success of the Compliance Surveillance Initiative, or CSI, a monitoring and enforcement program that targeted the Atlantic Coast [...]

By Randy Kesling A saying among anglers is that trout don’t live in ugly places – a nice reminder of what we love about West Virginia and the cold, clear, clean, fishable waters of our mountain home. WV has but one native trout species, the brook trout (Salvelinus fontinalis) which is designated as WV’s official [...] 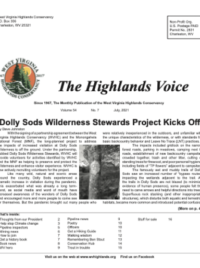