Summer has arrived and Mother Nature continues to show off her amazing splendor throughout the highlands. As one travels throughout the mountains the trees have leafed out and wildlife is everywhere. It is fantastic to see the flowers blooming and wildlife mothers (birds and animals) taking care of their young. Certainly, it makes us forget [...]

From the Southern Environmental Law Center “While today’s decision was not what we hoped for, it addresses only one of the many problems faced by the Atlantic Coast Pipeline. This is not a viable project. It is still missing many required authorizations, including the Forest Service permit at issue in today’s case, and the D.C. [...]

By John McFerrin For activities which cross or result in a discharge into streams and wetlands, builders must have a permit pursuant to the Clean Water Act.  Even if the permit is issued by a federal agency, federal agencies cannot authorize projects in a state unless that state certifies (called a 401 Certification) that the project [...]

By John McFerrin             The April, 2020, issue of The Highlands Voice included a story about threats to the Migratory Bird Treaty Act.  Those threats continue to grind ahead, putting the effectiveness of the Act in serious jeopardy.  In the midst of the gloom, there is some hope that Congress will step in and save the Act. Background             For a [...]

Changes Coming to the National Forests

By John McFerrin             Many, many years ago a coal operator in eastern Kentucky was quoted as saying, “Green?  You want green, we’ll just take all the money we’re going to make on this and pin it to the highwall.”  At another time and place, not quite so long ago, we had Forest Service managers who appeared to [...]

Delay for the Atlantic Coast Pipeline

Dominion Energy and Duke Energy, co-owners of the Atlantic Coast Pipeline, have asked federal regulators for a two year extension.  They now say the 600 mile pipeline will not be completed until 2022. The developers originally projected construction would be completed in 2019.  Multiple legal challenges and permitting issues have added to the delays, as well as the [...]

By John McFerrin             West Virginia, Virginia, and North Carolina are thick with rivers and streams.  More and more, they are (or are proposed to be) thick with pipelines.  If the pipelines and the waterways are ever to coexist (whether this is feasible is still up in the air), there will be stream crossings.  The Atlantic Coast Pipeline and [...]

Thinking about the Economics of Petrochemicals

For some while I've considered jotting down stories from those early days of organizing West Virginia Highlands Conservancy -- often around the table in Pittsburgh Climbers' rented shack in Onego. It was a simple place, with outdoor, um, facilities, furnished with whatever was left over from a dozen members' homes and some things Jean Rodman [...]

The Good Gets Better

The April, 2020, issue of The Highlands Voice celebrated the passage of Senate Bill 583.  It would further the development of renewable energy resources by allowing the state’s utility companies to “plan, design, construct, purchase, own and operate” and recover certain costs of developing renewable generation and energy storage facilities through a program overseen by the Public Service [...] 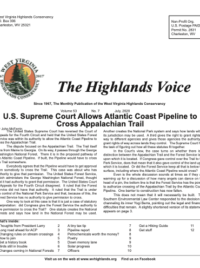