By John McFerrin The West Virginia Supreme Court of Appeals has ruled that a gas company may not use surface of one landowner’s land in order to extract gas from underneath nearby land.  This will go a long way toward giving surface owners protection from gas drilling. Since longer ago than anybody can remember, the [...]

June, in addition to providing another abundance of rain, has produced a flurry of information and actions that will be of interest to West Virginia Highlands Conservancy members. Proposed Pump Storage Project in Tucker County, West Virginia Freedom Works, LLC has notified the Forest Service that they will be coming back with a revised plan [...]

By John McFerrin As reported in the May, 2019, issue of The Highlands Voice, the West Virginia Department of Environmental Protection (DEP) has changed the conditions that are placed on permits for stream and wetland crossings for natural gas pipelines. Under the federal and state Clean Water Acts, anybody who wants to cross a stream [...]

By John McFerrin The West Virginia Highlands Conservancy has joined with the West Virginia Rivers Coalition, the Ohio Valley Environmental Coalition, Appalachian Voices, and the Sierra Club in a notice of intent to sue to the parent companies operating 15 coal facilities -- including mines, preparation and processing facilities, and a power plant -- and [...]

Paste This in Your Hiking Guide

By Hugh Rogers Two pages in the front of the new edition of the Monongahela National Forest Hiking Guide alert the reader to “Changes in This 9th Edition.” Going beyond the headline, we included a map of a proposed trail system on Cheat Mountain (thanks to Greenbrier District Ranger Jack Tribble for the map). * [...]

I am watching shadow patterns move across the gray roof of my neighbor’s place, watching tips of winter trees begin to show spring’s ochre, their sharpness go soft, mauve.   I am remembering that today, driving back roads home, I saw black swaths of turned earth ribboning undulating fields ripe for planting summer wheat. And [...]

In October, 2018, and November, 2018, The Highlands Voicereported that the Circuit Court of Summers County had temporarily prohibited the crossing of the Greenbrier River by the Mountain Valley Pipeline.  This was at the request of theGreenbrier River Watershed Association, Indian Creek Watershed Association, Ashby Berkley, and Ty and Susan Bouldin. These plaintiffs claimed that [...]

FOREST FORENSICS: Clues in the Woods to History

By Chris Bolgiano “Good fences make good neighbors,” wrote Robert Frost in his poem, “Mending Wall.” He was being ironic, because the point of his poem was to question building walls between neighbors – except where cattle were concerned. Most old fences in the woods mean one thing: livestock. But were animals fenced in, or [...]

According to data published by the United States Energy Information Agency, in April, 2019, for the first time ever, the renewable energy sector (hydro, biomass, wind, solar and geothermal) generated more electricity than coal-fired plants. This news is not quite so gloomy for the coal industry as it appears.  There are seasonal considerations. Of particular [...]

Recovering the Natural Wealth of Our Rivers

By Chris Wood In early 2019, while helping the Department of Natural Resources to stock trout in a stream, West Virginia Gov. Jim Justice said, “We dump a bunch of fish in one hole, then drive to the next big hole and dump a bunch of fish and hope they will disperse. It’s not a [...]

Celebrating 30 years as a West Virginian

By Sheila McEntee This year, I celebrate 30 years as a West Virginian. I was born in Maryland and later lived in Massachusetts and North Carolina. But I’ve never lived anywhere as long as I’ve lived in the Mountain State. I came here in 1989 as a young, married woman with two small children. We [...]

The United States Secretary of the Interior has announced a proposal for new or expanded hunting and fishing opportunities at 74 national wildlife refuges and 15 national fish hatcheries managed by the U.S. Fish and Wildlife Service (Service) across more than 1.4 million acres. The proposal would increase the number of units in the Service’s [...] 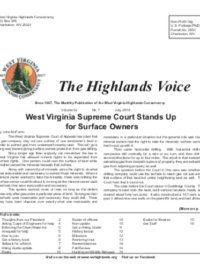