Blair Mountain Battlefield Back on the National Register

By Cindy Rank THE GOOD NEWS The listing of Blair Mountain Battlefield on the National Register of Historic Places has been re-affirmed! As you may recall from previous issues of the Voice, the Battlefield was nominated in July 2005, officially listed in March 2009, challenged a month later, and delisted at the end of 2009. [...]

No Reason to Cancel Study on Mining and Public Health

By Kate Mishkin   There’s no apparent reason why a study on the health effects of mountaintop removal was halted last year, according to the Department of the Interior’s deputy inspector general. The study, “Potential Human Health Effects of Surface Coal Mining Operations in Central Appalachia,” would have looked at the health effects on residents [...]

How Do Tiny Air Particles from Fracking Affect Public Health?

Building and operating a hydraulic fracturing well site can emit airborne particles in multiple ways. But scientists still don’t fully understand how these particles impact human health. Travis Knuckles, assistant professor in the West Virginia UniversitySchool of Public Health, has received $450,000 from the National Institutes of Healthto investigate these questions. Hydraulic fracturing is a [...]

The United States Department of the Interior has announced $7 million in construction funding for a new Administrative/Visitor Center for Canaan Valley National Wildlife Refuge.  The current facility was a former restaurant built in 1975, later turned into offices, and is no longer adequate to meet the needs of either visitors or employees. The building [...]

By Cindy Ellis We know about the joys of mountain streams. We know icy, rushing waters and rocky waterfalls and verdant banks with spruce or hemlock. In our recent history, Don Gasper and Don Garvin were two of our volunteers and board members who especially savored and shared with us the fun of fishing in [...]

By John McFerrin The United States Court of Appeals for the Fourth Circuit has temporarily suspended all stream and wetland crossings in West Virginia by the proposed Mountain Valley Pipeline.  The suspension will last at least until further court proceedings scheduled for September. Background To go from its beginning in Wetzel County, West Virginia, to [...]

Through Our Native State

By Lenore Coberly   We drive down the Little Kanawha late in life, enfolded by green hills in spring leaf, at speed limits forty on curves, a constant in these parts.   At Dolly Sods we climb to see calypso orchids in deepest red and boulders piled across the top, the heart of the world's [...]

The summer board meeting of the West Virginia Highlands Conservancy will held on Saturday, July 21 at a location near Elkins. While only Board members are allowed to vote and make motions, all members are allowed to participate in discussions. If you want to come, contact President Larry Thomas at larryvthomas@aol.comfor directions, You should come.  The [...] 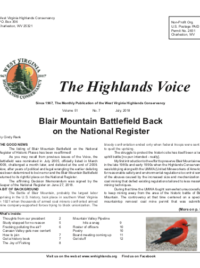