By Cindy Rank Sunday, June 11th dawned clear and warm - a perfect day for gathering to dedicate the new Forest Preserve in Doddridge County west of Clarksburg, WV. Decades ago Marie Hall Jones, in her wisdom and with a deep respect for nature and especially old growth timber, bought the Doddridge County property at [...]

Our group, throughout its 50 years, has a long record of positive actions for the environment in West Virginia.  It is gratifying to read, in our history book, of those wins. But, our progress over time has not been without a few fumbles.  We hope we’ve learned from our missteps and we consider it valuable [...]

By Cindy Rank As reported in previous issues of the Voice, mining operations on the mountain ridges along the Clay/Nicholas County line continue to pollute streams that flow into both the Gauley River to the south and the Elk River to the north. Many of these articles have focused on mines operated by Fola Coal [...]

By Dave Saville In a now famous court decision called “The Monongahela Decision,” Judge Robert E. Maxwell of the United States District Court for the Northern District of West Virginia in Elkins curtailed the authority of the U. S. Forest Service (USFS) to sell timber from National Forests. In the early 1970s, the Highlands Conservancy [...]

The Summer Board Meeting will be at 9:30 a.m. on Saturday, July 22, 2017, at the Yew Mountain Center in Hillsboro, WV.  All members are welcome to come, listen, discuss, be in the drawing for the door prize, and otherwise fully participate.  Only Board members can make motions and vote.  If you want to come, [...]

We are pleased to congratulate an ally organization on their own anniversary.  The Kanawha Trail Club has been active in West Virginia for 75 years! This Charleston-based group was the brainstorm of Daily Mail columnist Saul Padlibsky.  Some history of the KTC has been written by Carl McLaughlin, member of both WVHC and KTC. Carl [...]

The National Academies of Sciences, Engineering, and Medicine are moving forward with its study of the connection between surface mining and public health.  Its mission is to review the evidence and determine what effect large surface mining operations have upon the health of those living nearby. The study committee had its first public meeting on [...]

Will FERC Protect Us From the Atlantic Coast Pipeline?

By John McFerrin Ever since proposals for the Atlantic Coast Pipeline and the Mountain Valley Pipeline became public, we have heard much about the environmental effects of the pipelines.  People talked about threatened species.  They asked (without receiving satisfactory answers) just how Dominion planned to cross those mountain ridges without making a terrible mess.  People [...] 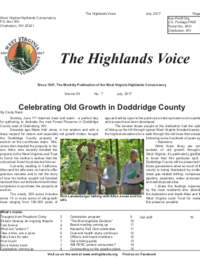