A message from our president

As 2019 was coming to a close, my first thoughts were that the year went by in such a whirlwind, but also how it was a very successful, productive and active year for the Conservancy. The Board continued to be very active in the governance of the Conservancy and the Board’s committees were very busy [...]

The quarterly board meeting of the West Virginia Highlands Conservancy will be held on Sunday, January 19, 2020, from 10 to 3, at Café Appalachia in South Charleston, WV.  Members are welcome to attend and take part in the discussion although they may not vote or make motions.  We hope to focus on what’s next for [...]

Time to dust off the baloney-grinding and monkeyshines clip art.  The West Virginia Legislature will convene again on January 9, and their own website can help you keep track of officials and laws that interest you. It is http://wvlegislature.gov/ Additionally, you can subscribe to legislative updates through the West Virginia Environmental Council at https://wvecouncil.org/  and through the [...]

All events are free and open to the public and begin at White Grass Ski Touring Center. Jan 1 2020 Snowshoe Discovery Tour - 10 am A natural history snowshoe walk with Chip Chase as he endlessly gabs about the history of local skiing, quirky climate facts, railroad history, and the environmental battle for Canaan Valley [...]

By Kent Karriker Remember the pump storage project that was proposed for Backbone Mountain about a year ago, and then axed because of impacts to sensitive National Forest lands?  Well, it’s back, but in a different location.  Project proponent FreedomWorks, LLC has filed a new application with the Federal Energy Regulatory Commission (FERC) to study the [...]

Forest Forensics: Finding Clues in the Woods to History

By Chris Bolgiano It stands on our ridge like some kind of modern art sculpture, with its jutting iron beam and iron wheels sinking into the earth. It pulled logs up from the slopes and hollows to the ridge, where a cart or truck carried them to a mill or a rail depot. The trees [...]

By LeJay Graffious “There goes one!” Zach calls out.   The nightly crepuscular flight of the American Woodcock had begun.  The team had high expectations of trapping seven timberdoodles to band and install GPS transmitters.   The core team was Zachary McCraken, Jackie Burns and LeJay Graffious.   The team was assembled by Canaan Valley Wildlife Refuge (CVWR) Biologist, Dawn Washington.    Zach, an [...]

"Nothing lives long...only the earth and the mountains." Black Kettle If only that were true, Black Kettle If only  If only it weren’t permitted  promoted and  profited from the annihilation of boulders  covered  by creation  with lichens and green moss  of every color and depth,  flora and fauna,  and all manner of critters  seen and [...] 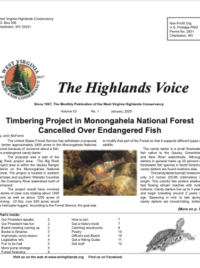