By John McFerrin The United States Court of Appeals has stopped the Atlantic Coast Pipeline from crossing the Monongahela National Forest and the George Washington National Forest.  The Court concluded that the Forest Service’s decisions violate the National Forest Management Act (“NFMA”), and the National Environmental Policy Act (“NEPA”). In addition to stopping the National [...]

By Hugh Rogers Early Saturday morning, December 1st, at the Law School in Morgantown, Tom Rodd is bouncing around the lobby, greeting, quarterbacking, telling stories. Coffee and Danish are available, but that’s not what spins his turbine. His latest project, “National Energy Conference 2018: Climate Change Issues Update,” has drawn a noisy crowd. Friends and [...]

Mary Wimmer Gets an Award

Mary Wimmer was recently honored by the Morgantown Convention and Visitors Bureau with the Star of Industry Award.  This award recognizes those who go above and beyond in the tourism industry and doing projects to promote tourism.  Mary is a co-founder of Morgantown Area Paddlers. Since its founding in 2015, the group has held 116 free [...]

That’s West Virginia’s ranking in the 2018 State Energy Efficiency Scoreboard published by the American Council for an Energy-Efficient Economy (ACEEE).. This represents a drop of two positions from 2017.  West Virginia scored 5.5 points out of a possible 50, one point less than it scored in 2017. The rankings are based upon evaluations of [...]

Another Pipeline Controversy in North Carolina

In North Carolina there is an ongoing uproar over approval of a state water pollution permit for the Atlantic Coast Pipeline, with words such as “pay-for-play” and “slush fund” being tossed about with reckless abandon. Here’s what happened:  for months in 2017 and early 2018, the pipeline developers met and negotiated with Governor Roy Cooper [...]

By April Crowe Keeping up with pipeline construction is enough to make anyone’s head spin! The 3 major pipelines currently under construction--Atlantic Coast (ACP), Mountain Valley (MVP) and Mountaineer Xpress (MXP)--amount to a total of 10,489 acres of earth disturbance. There are only 5 DEP Inspectors covering this onslaught of construction across West Virginia. Divided [...]

By John McFerrin In September, 2018, the West Virginia Legislative Auditor completed and delivered to the Legislature an audit of West Virginia’s State Park system. The Audit found that the Park system is not self-sufficient.  It is around the middle of national rankings so far as self-sufficiency is concerned. Among states that do not charge an [...]

By John McFerrin The United States Environmental Protection Agency and the United State Army Corps of Engineers have unveiled a proposal to reduce the waterways and wetlands that are protected from pollution.  It proposes to do this by adopting a revised definition of "waters of the United States", the term the Clean Water Act uses to describe [...]

The Spotted Lanternfly (Lycorma delicatula) May Be Headed for West Virginia The spotted lanternfly is an invasive pest, primarily known to affect tree of heaven (Ailanthus altissima). It has been detected on many host plants, including apples, plums, cherries, peaches, nectarines, apricots, almonds, and pine. It also feeds on oak, walnut, poplar, and grapes. The [...] 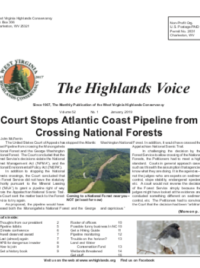