West Virginia has waived its opportunity to review the Atlantic Coast Pipeline to determine whether it will cause a violation of West Virginia’s water quality standards. Under Section 401 of the federal Clean Water Act, federal agencies cannot authorize projects in a state unless that state certifies (called a 401 Certification) that the project will [...]

Sending everyone good wishes for the New Year, and hopes that it will be filled ONLY with good health, success in all those things that really matter to you…and most of all, to many wonderful, memorable moments! The Fiftieth Anniversary celebration of the West Virginia Highlands Conservancy was touted as a rousing success and I [...]

A Peaceful, and Gentle, Way Forward

By Angie Rosser On Nov. 28, I, like many West Virginians, traveled to Charleston for a hearing on the Trump administration’s proposal to repeal the Clean Power Plan. The CPP was developed by scientists, economists and policy experts as a response to a Supreme Court ruling that carbon pollution be regulated. As a resident of [...]

Another Reason to Celebrate

Through the efforts of National Geographic, the National Audubon Society, BirdLife International, and the Cornell Laboratory of Ornithology, 2018 has been declared the Year of the Bird. This year was chosen because it is the centennial of the Migratory Bird Treaty Act, passed in 1918.  The Act implements a treaty that had been entered into [...]

By Rick Webb, Program Coordinator, Dominion Pipeline Monitoring Coalition (DPMC) My name is Rick Webb. I recently retired from my position as a Senior Scientist at the University of Virginia, where I spent 30 years studying the biology, hydrology, and geochemistry of high-quality streams in the mountains of Virginia. I am currently Program Coordinator for [...]

By John McFerrin The J. F. Allen Company has asked for a Major Modification of its NPDES permit for its Pond Lick Quarry outside Elkins.  The quarry drains treated waste water into Shavers Fork, a trout water. The federal and stte Clean Water Acts prohibit any discharge of any pollutant into the waters of the [...]

By Cindy Rank The Antero Clearwater permit appeal reported in the December 2017 Highlands Voice led to a settlement agreement requiring stronger monitoring requirements for the landfill accepting frack waste byproducts. On December 11, 2017 the West Virginia Highlands Conservancy and the West Virginia Rivers Coalition entered into an agreement with Antero Treatment, LLC, to [...]

From Paul Salstrom Steven Stoll’s book Ramp Hollow: The Ordeal of Appalachia just appeared from a major New York publisher, and as reviews accumulate in the media, they often mention Stoll’s proposal of a “Commons Communities Act” for Appalachia – a federal act to reestablish “common lands” under the care of specifically-designated rural Appalachian communities.   [...]

By Dave Cooper I have noticed that backyard fire pits have become a trendy item in the cities.  It seems that Americans have finally discovered what the Scouts and WVHC members have known for a long time: There is nothing like the cozy warmth of a campfire on a cool night to stimulate some good [...] 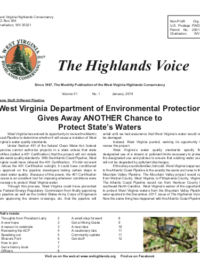