Now that the developers (Dominion) of the Atlantic Coast Pipeline have abandoned the project,  all that is left is to repair the disturbance that resulted from the partial pipeline construction.  The developers have filed plans with the Federal Energy Regulatory Commission setting out how they plan to do the restoration.             Disturbance along the 600 mile long pipeline [...]

Old man winter certainly has arrived in the highlands with freezing temperatures, strong winds (causing wind chills to drop below zero) and several snowstorms blanketing the mountains. It is impossible to predict Old Man Winter’s plans for February and March, but we will have to deal with whatever we get. As mentioned in the January [...]

By Mike Tony West Virginia Rivers Coalition staff scientist Autumn Crowe has been closely following the Mountain Valley Pipeline since it was first proposed and says that pipeline construction through the steep slopes of West Virginia has taken a dangerous toll. “They’re trying to [work through] steep slopes with highly erosive soils, and we’re seeing [...]

By Frank Young The 2021 legislative session is just around the corner, and we have our work cut out for us. The West Virginia Environmental Council (WVEC)--of which WV Highlands Conservancy is a several decades long member and fiscal supporter-- is the lobbying arm of the West Virginia environmental advocacy community. Starting February 10th, we [...]

Whenever anybody says anything about solar power, climate change, and the like, the first thoughts of many run to stereotypes about squishy liberals, not living in the real world, probably vegan, etc.  After a bit more thought, they decide that whatever the idea was can be filed away under “stuff not worth thinking about.”        The proposal [...]

What is West Virginia’s Energy Future?

By John McFerrin             “Coal, is West Virginia”, or so goes the radio jingle that the Friends of Coal sponsors.  The tune that goes with it swells; even if some might disagree with the words, it is the kind of music that inspires, makes us want to charge forth, do great things.             While not literally true, the [...]

By Cindy Rank Responding to another in what seems to be a never-ending number of coal mines that continue to pollute streams throughout the state with toxic levels of selenium West Virginia Highlands Conservancy recently joined in another legal challenge. JMAC Leasing’s Briar Mountain operation, a 970 acre mine in Kanawha County, is but the [...]

Bad News (but some hope) for Birds

By John McFerrin             President Joe Biden (President of the United States, or POTUS) has directed that the Environmental Protection Agency review the Waters of the United States (or WOTUS) rule. It’s time for another round in what has been a decades long battle. What this is all about This all started in 1972 with the [...]

Law School (in a nutshell)

Law schools routinely enthrall (or bore) students with a course called Administrative Law.  In the part where they talk about how regulations get made, the lesson is that nothing happens quickly.  Agencies announce that they have an idea, that maybe they want to change a regulation.  People who have an opinion chime in.         Then there is a proposed [...]

By Linda Cooper             Hikers, skiers, campers, RVers, photographers, bird watchers, canoeist and kayakers, plant collectors/ florists, rock climbers, horseback riders, cavers, festival goers, they are all here en masse and they love West Virginia's outdoors and wildlife. Visit any of our state parks or other wild protected areas and you will see them. By the [...] 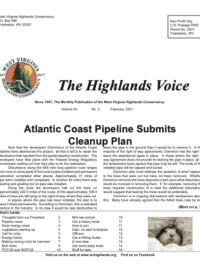