Old man winter certainly has been kind to the highlands with milder weather and little snow to date. However, who can predict Old Man Winter’s plans for February and March? As I look out my windows at the trees on the very top of Allegheny and North mountains, which seem frozen in time, my thoughts [...]

Finding Out What You Think

Our Connection with Camp Waldo

By Cindy Rank A great number of mining and water related legal challenges pursued by WV Highlands Conservancy over the past 20-30 years have aimed at curtailing the pollution emanating from mines throughout the state. As large scale and Mountaintop Removal Mines continued to be permitted, WVHC - together with co-plaintiff groups OVEC, Sierra, WV [...]

With the West Virginia Legislature now in session there are several bills of interest.  A monthly publication such as The Highlands Voice is not the best source for news on such things.  Things change too quickly; there are too many twists and turns.  By the time news comes out in a monthly publication things may have changed half [...]

More Questions for Mine Testing Facility

By Ellie Bell The Highlands Voice, May 2019, mentioned that a branch of the Center for Disease Control (CDC), the National Institute of Occupational Safety (NIOSH), is exploring a plan to relocate the Underground Mine Safety Research Facility from the Lake Lynn Experimental Mine near Pittsburgh to a property that borders Snowshoe Mountain Resort and [...]

The West Virginia Highlands Conservancy met in Charleston, with some of the members from more mountainous parts of the state snowed in and unable to attend.  The Board did the usual businessy things such as hearing the financial report, approving a budget, etc.  One of the notable things was that the annual fund appeal that we have [...]

By Dave Saville In 1970 a young Forestry Professor, Dr. Jim Brown, left WVU to take a job at Ohio State University. He was interested in Christmas Trees. His research spanned several decades. He is best known for his work on West Virginia’s Balsam Fir, which has come to be known as Canaan Fir.   When [...]

The Atlantic Coast Pipeline: an update and what we are doing

The West Virginia Highlands Conservancy (WVHC) provided a grant in the summer of 2018 to support the work of the Allegheny-Blue Ridge Alliance (ABRA) and West Virginia Rivers Coalition (WVRC) of which WVHC and WVRC are members, in overseeing construction activity of the Atlantic Coast Pipeline (ACP) to assure compliance with applicable permit and regulatory [...]

By Beth Little             The Monongahela National Forest has a natural resource that is ignored.  It is darkness – an absence of artificial light at night.  Around the planet there are fewer and fewer places where the wonders of the night sky are visible; whereas there are many places on the Mon where the Milky Way can be [...]

The United States Fish and Wildlife Service has published a proposed rule to designate critical habitat for the Big Sandy crayfish (Cambarus callainus) and the Guyandotte River crayfish (Cambarus veteranus).   The Big Sandy crayfish is federally listed as a threatened species and currently lives in specific watersheds of Virginia, West Virginia, and Kentucky.  The Guyandotte [...]

All Hail the Real Prognosticators

In most Februaries, The Highlands Voice takes note of Groundhog Day, honoring the putative prognosticator of spring.  According to an article in Scientific American, however, the cute little rodent is lousy at it.  It can predict the coming of spring no better than a coin flip.   The real prognosticators are birds, particularly the Eastern Bluebird.  While Groundhogs do what they are going [...] 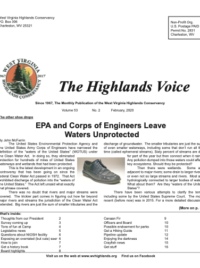