The West Virginia Department of Environmental Protection has taken enforcement action against the Mountaineer Xpress Pipeline.  In a letter to the Department, the West Virginia Highlands Conservancy has joined with eleven other groups (Led by the West Virginia Rivers Coalition) to say that the action was too little, too late. Columbia, the pipeline developer, was [...]

Watching it snow here on the mountain, I realized that old man winter certainly has a strong grip on the highlands and will for some time. Mixed in were thoughts of the many issues that WVHC addressed during 2018, mountaintop removal mining and valley fills, numerous gas pipelines proposed or under construction, the proposed pump [...]

By Kent Karriker In the December 2018 Voice, we first alerted you to the pump storage project that has been proposed by FreedomWorks, LLC for a site in Tucker County.  After publication of that article, the Highlands Conservancy Public Lands Committee studied the available information and concluded that the project would have unacceptable impacts on [...]

‘Grinches’ not those of us living in pipeline’s path

This is a piece of astounding falsehoods.  Gas pipelines are not safe, clean, nor quiet.  They hold the potential to leak to air, water, and land.  Remember the explosion at     Sissonville and the destruction there.  The attendant compressor stations for pipelines are relentlessly noisy and hold the same potential for leaks and ruptures. Also amazingly [...]

Now that Beth Little has a moved on (see story on p. 14) we are fortunate to have Dave Saville returning to his old position as Membership Secretary/Administrative Assistant.  He previously held that position for nine years, ending in 2007. He left the first time to take a full time position with the Wilderness Society.  [...]

By Hugh Rogers The end-of-year National Energy Conference at WVU Law School, “Climate Change Issues Update,” offered too much to cover in one Voice.Last month, we reviewed issues, communication and education, that are especially important in the state with the largest percentage of climate change deniers. (See climatecommunication.yale.edu. Thanks to Than Hitt for the cite.) [...]

Editor: Regarding a recent article on so-called global waning, a number of points should be considered. I understand the myth of so-called global warning ls based on computer simulations. In an article which I read 30-years ago ln Natural History an attempt was made to include factors which might help our understanding. It was stated [...]

The rumor around the West Virginia Legislature is that there will be no bill authorizing timbering in State Parks this year.  Rumor has it that the public uproar at such a proposal was sufficient to dissuade the Legislature from any attempt this year. Late at night, around the camp fire, long time Legislative observers have [...]

Pipeline CSI: On the Ground & In the Air

The Pipeline Air Force conducted three ACP surveillance flights over the 200-mile CSI focus area in November and December of 2018. Flights on November 18 and December 12 covered the pipeline corridor in West Virginia, from Harrison to Pocahontas Counties, where about 45 miles of construction activity has occurred and about 10 miles of pipeline [...]

By John McFerrin As of the beginning of 2019, Beth Little has left her position as Membership Secretary/Administrative Assistant.  We are sad to see her go.  She had wanted to leave for a couple of years; we kept saying, “OK, OK, we understand.  Just stay until we can find somebody to replace you.” Finally, we [...]

By John McFerrin It was not a fit night out for man nor beast as the Board gathered in Charleston for the winter meeting.  Any impulse towards soliloquy, rambling, exhortation, declamation, long discussion, etc. was tempered by our mutual desire to be home before dark. We did have some things to take care.  The Executive [...] 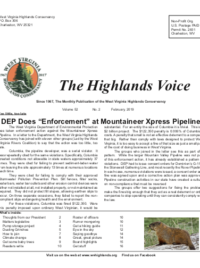