Another Year, Another Full Plate

By Larry Thomas January started the new year with a lot of activity. I believe you could say it came in like a lion. From the proposed pipelines, proposed logging in our state parks and the quarterly board meeting it has been very busy as well as disturbing. First was a tour of the proposed [...]

Corridor H: Must a Bad Project Be Badly Done?

By Hugh Rogers One day last September, I drove over to the Cherry Fork end of South Haddix Trail in northern Randolph County. Our friend Barbara Weaner, who lives at the other end of the trail, had told me that Corridor H construction had begun near Monongahela National Forest land. South Haddix is the closest [...]

By Frank Young Legislative Session Preparations: The West Virginia Environmental Council (WVEC, aka “E-Council”) is, as its name suggests, a council or coalition of several environmental organizations whose general purposes include conservation of the natural resources of West Virginia and the region, and dedication to the improvement and preservation of the environment through education, grassroots [...]

Could Logging in Parks Help Wildlife?

Governor’s Plan to Log State Parks Is a Bad Idea

By Robert Beanblossom I retired after 42 years with the W.Va. Division of Natural Resources and worked both for our state park system and the Division of Forestry. I am an active member of the Society of American Foresters (chairman in West Virginia in 2008 and 2009) and am now volunteering with the U.S. Forest [...]

The Southern Environmental Law Center and Appalachian Mountain Advocates filed a challenge in federal court on behalf of 11 conservation groups challenging the Federal Energy Regulatory Commission’s decision to permit the Atlantic Coast Pipeline. “FERC demonstrated in its split decision to approve the pipeline that there is lingering doubt about the need for this destructive [...]

The West Virginia Land Trust has acquired a 123 acre parcel of land on Bickle Knob.  It had to borrow the money for the acquisition; now it has undertaken a fundraising campaign to repay the loan. The parcel is just below the Bickle Knob observation tower.  Although it is surrounded by National Forest land, it [...]

The Federal Energy Regulatory Commission has rejected a proposal by the United States Department of Energy to provide subsidies to coal and nuclear power plants. The proposal came out of a concern that the electrical grid had become unreliable, leaving the country vulnerable to possible shortages of electricity.  The Department of Energy believed (1) that [...]

The Federal Energy Regulatory Commission (FERC) has denied a request by First Energy to sell its Pleasants Power Station to Mon Power and Potomac Edison. First Energy said that it needed more capacity for its West Virginia subsidiaries.  To meet this need, it solicited proposals.  The only proposal that it received was one that involved [...]

Meanwhile, Over in North Carolina

By Cindy Rank Out with the old, in with the new. At least that’s the traditional expression about the advent of each new year. Then again some of the old just never seems to go away. Such is the case with pollution from mountaintop removal and valley fill mining operations in central and southern West [...]

What Kind of a “Healthy” Forest Do We Want?

By John McFerrin In all the discussion of whether we should timber in West Virginia’s state parks, there are a couple of terms that people use, saying them as if we all know what they mean.  Then confusion comes because the words mean different things to different people.  How the words are used reveals attitudes [...]

Logging in State Parks: Just What Are Other States Doing?

By Doug Wood Many of our state parks and one state natural area have trails that pass through magnificent mature forests that attract hikers.  An economic study and a market research study conducted by WV Parks found that hiking is the number one gateway activity introducing visitors to WV’s state park system (www.wonderfulwv.com/SiteCollectionDocuments/Archive/Sep2016.pdf ). Do [...]

By Doug Wood Senate Bill 270 and House Bill 4182, introduced by Governor Justice at the urging of Commerce Secretary Woody Thrasher, Division of Forestry Director Barry Cook, and Dept. of Natural Resources Director Stephen McDaniel will allow logging in our state parks.  This will cause damage to numerous bird, plant, and amphibian species, our [...]

A citizen initiative to monitor construction activities of the Atlantic Coast Pipeline (ACP) is being launched by the Allegheny-Blue Ridge Alliance (ABRA), a coalition of over 50 organizations in Virginia and West Virginia.  The objective of the Pipeline Compliance Surveillance Initiative (Pipeline CSI) is to ensure strict application of environmental laws and regulations for the ACP. “We [...]

By John McFerrin The January meeting was a time of transitions, and more transitions to come.  This was the first Board meeting presided over by new President Larry Thomas.  It was a peaceful transition with very little (actually none) pomp or circumstance. We’re not a very pompous bunch. With Larry’s ascent to the throne, Cindy [...] 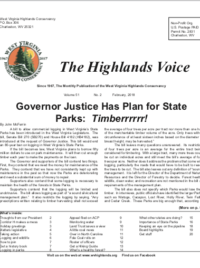