By John McFerrin The Federal Energy Regulatory Commission (FERC) and Dominion Resources have proposed an accelerated schedule for approval of the proposed Atlantic Coast Pipeline.  The Forest Service has pushed back against that proposal, suggesting a more thorough review. Dominion’s proposed 600-mile Atlantic Coast Pipeline would cross 21 miles of the George Washington and Monongahela [...]

The January 22, 2017, meeting was the usual mix of business and hearing about issues. In the President’s report, President Ellis mentioned a few items of interest.  We agreed to Board Meeting dates for 2018 of January 21. April 22, July 21, and October 21. Jim VanGundy is still working on getting us a new Board [...]

On Climate Change and the Arc of History

By John McFerrin February is the month of predictions, the month that opens with Groundhog Day when we all at least pretend to listen to the weather forecast of a rodent.  It is as good a time as any to look at a previous prediction or, more precisely, an analysis of a trend noted by [...]

Places in Our Hearts

Most times we do not save mountains all on our own.  We have help.  But in many past instances, we did take the lead and offered a major portion of the work required to protect quite a few special places in the Highlands of West Virginia. There’s a long list:  Cranberry, Dolly Sods, Blackwater, Otter [...]

By John McFerrin The United States Court of Appeals for the Fourth Circuit decided that a West Virginia coal mine violated the state and federal Clean Water Acts by discharging pollution into nearby streams. The case, originally filed in March 2013, alleged that mine runoff from a Fola Coal operation in Clay and Nicholas Counties, [...]

Trail Truthing for the Hiking Guide

By Hugh Rogers Beginning in 1988, Allen de Hart co-authored four editions of the Monongahela National Forest Hiking Guide for the West Virginia Highlands Conservancy.  His death last fall, at the age of 90 (see the Voice, December 2016), came as he was working on the 9th edition.  We had already lost co-author Bruce Sundquist, [...]

By Matt Kearns and David Lillard People who care about public lands know the last few years have been challenging. Advocates have fought off several Congressional attempts to change or kill the Land and Water Conservation Fund, changes in how federal lands are managed, attempts to streamline industrial development — even sell them off or [...]

Getting Ready for the Legislature

Places in Our Hearts

Most times we do not save mountains all on our own.  We have help.  But in many past instances, we did take the lead and offered a major portion of the work required to protect quite a few special places in the Highlands of West Virginia. There’s a long list:  Cranberry, Dolly Sods, Blackwater, Otter [...]

On 22 September 2016, the United States Fish and Wildlife Service proposed a rule to list the Rusty Patched Bumble Bee as federally endangered. There have been no observations in West Virginia since 2000.  There have, however, been historical sightings in West Virginia.   There are no records of sightings in extreme northern or extreme southern [...]

By Ken Ward Jr. West Virginia Department of Environmental Protection Secretary Austin Caperton on Friday fired Wendy Radcliff, the leader of the DEP’s Office of Environmental Advocate. The move immediately drew strong criticism from West Virginia citizen groups and environmental organizations that were already wary of how Caperton, a longtime coal industry consultant, would run the [...]

By John McFerrin The January, 2017, issue of The Highlands Voice reported that the Stream Protection Rule would become final in January, bringing to an end over fifteen years of litigation, anticipation, and commentary.  According to the official press release from the Office of Surface Mining, the new rule “updates 33-year old regulations and establishes [...]

Want to Be a Stream Monitor?

Trout Unlimited is working with the West Virginia Rivers Coalition to train volunteers to monitor streams that have the potential to be impacted by shale gas-related development and other non-point sources of water pollution.  Cindy Ellis and Frank Young have been participating in this program in streams close Charleston and vicinity and give it two [...]

Just as surely as we can expect Robins in the spring or a Presidential tweet at midnight, the West Virginia Legislature will consider a change to the water quality standards.  We may as well be ready. The question is how clean we keep state waters.  Under current law, different streams can be classified as suitable [...]

The West Virginia Environmental Council (WVEC) government affairs committee re-aligned the WVEC lobbying priorities to be pursued in the 2017 legislature, which begins February 8. The re-aligned priorities make upcoming efforts more consistent with the energies and the strengths of the lobby team. The West Virginia Highlands Conservancy has proposed legislation for Exempt Wholesale Generator [...]

From the Archives All issues of our newsletter, The Highlands Voice, beginning with Volume 1, in 1969, are archived on our website. Enjoy the following highlights taken from 1969 The Highlands Voice, Volume 1, #s 1-6 The National Timber Supply Act, gives prime importance to timber harvesting in National Forests and subordinates watershed protection, recreation, and [...] 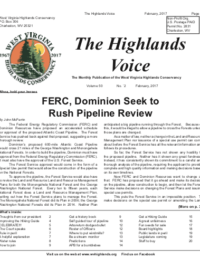