Bluestone Mine Gets Its Comeuppance

By Cindy Rank First a quick reminder about our actions with regard to Bluestone Coal violations at its Red Fox mine in McDowell County.  (Bluestone is a subsidiary of the Justice Group, which is controlled by the family of West Virginia Governor Jim Justice.) On June 4, 2019 West Virginia Highlands Conservancy (WVHC) joined the Ohio [...]

As we move into December, the Covid19 pandemic of 2020 continues to radically change our lives, certainly making us fully aware of the vast treasurers that our West Virginia highlands have to offer and why it is so critically important that we continue our fight to preserve and protect the highlands for future generations. During [...]

Mining Reclamation: Who Gets Stuck?

Background Note before you read:  The accompanying story is only the latest chapter in a controversy that has been going on since dinosaurs roamed the earth, more or less.  For decades the West Virginia Highlands Conservancy has been saying that the system West Virginia uses to assure that coal mines are reclaimed is inadequate.  The Highlands Voice has had [...]

An Irruption of Grosbeaks

By Cindy Ellis We have been longing to see them for years…and they’re back!  Those wildly handsome northern songbirds called Evening Grosbeaks have recently been seen this season in many parts of West Virginia.  Their bold coloring of gold, black, and white and their greedy behavior at feeders are unmistakable.  It may be that “absence [...]

By John McFerrin In recent years there has been a movement toward what is called “water reuse.”  The idea is that with the possibilities of drought and general water shortages, we need to start considering, as a source of useable water, the water that is now considered wastewater.  The result of this thinking would be a set [...]

By John McFerrin The United States Court of Appeals for the Fourth Circuit has granted a stay of the actions of the United States Army Corps of Engineers in its approvals of stream and wetland crossings by the Mountain Valley Pipeline.  This means that construction on stream crossings has to stop until the appeal is decided. Previously [...]

On the River Once

By Katherine McFerrin Mistletoe is the symbol for romance during the winter holidays. The classic mistletoe, imagined with its snowy white berries and thin green leaves, is not native to the United States. Rather, it’s the European mistletoe, Viscum album, which is found across Europe and parts of southern and western Asia. Similar to European mistletoe [...]

A Good Poem: The Blackwater

By Jack Slocomb             I think I first saw the Blackwater Canyon and falls when I was nine years old. That’s when I was living in Buckhannon, West Virginia, and my family and a small herd of their bridge club friends decided serendipitiously to drive up to Blackwater Falls for Sunday lunch. This happened quite a [...]

By John McFerrin             The outgoing administration has taken one step closer to a major policy change that would imperil migratory birds. Background The Migratory Bird Treaty Act is the United States’ effort to implement a 1916 treaty between the United States, Mexico, and Great Britain (agreeing on behalf of Canada) to protect birds that migrate [...]

By Dr. Christine Wimer President Jefferson County Foundation In our September article, we discussed in brief the Department of Environmental Protection’s use of Unilateral Enforcement Orders to allow entities to sidestep the requirements of the Clean Water Act. We wanted to update you on these important issues.  In February of 2019, when the Department of [...] 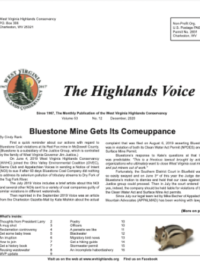