West Virginia Legislature: Ready or Not, Here it Comes!

Ready or Not, Here it Comes!

All Terrain Vehicles on Public Lands?

By Beth Little             The idea that we should allow all terrain vehicles (ATVs) on public lands in West Virginia is one that has been kicking around for years without much progress.  Now, as we approach the 2020 Legislative session, there are straws in the wind, indications that there is plenty of enthusiasm for the idea.             The [...]

A Green Amendment: Could We Ever Have One?

By Cindy Ellis Two Words Climate Change.  When WV Delegate Evan Hansen spoke to us at our Fall Review, he pointed out that he was the first to publicly use that two- word phrase on the floor of our legislature’s house chambers.  Then he continued by mentioning two more provocative words.  Green Amendment. Delegate Hansen reminded us that [...]

By John McFerrin             The MOJO Act takes several realities and tries to put them together in a way that benefits West Virginia.  Those realities are: West Virginia has more than 550 square miles of strip mined land and other degraded lands.  98% of this land is just sitting there.  The idea that there is this much strip mined [...]

By John McFerrin             Ever since the passage of the federal Surface Mining Control and Reclamation Act, coal mines have had to post a bond to guarantee reclamation.  If the company went out of business, disappeared, or for some reason did not reclaim the mine site, the state could forfeit the bond and do the reclamation.             In [...]

The Red-Tailed Hawk is a bird of prey known as a raptor. They can be found throughout most of North America. These birds are found as far north as northern Canada and interior Alaska and as far south as Panama and the West Indies. The red-tailed hawks that live in northwest Canada are much darker [...]

The Forest Service is on the cusp of finalizing its National Environmental Policy Act (NEPA) decision for the proposed Panther Ridge Habitat Enhancement Project.  On November 21, 2019, Forest Supervisor Shawn Cochran issued a letter explaining his responses to the two formal objections to the project, one of which was filed by the West Virginia Highlands [...]

By Chris Hunt Trout Unlimited has joined a bipartisan group of partners and lawmakers in calling on Congress to provide continued funding for the cleanup of abandoned mines and the legacy pollution of historic coal production.  The House Subcommittee for Energy and Mineral Resources met to discuss H.R. 4248, which would reauthorize the Surface Mining Control and Reclamation Act of 1977 and provide ongoing funding [...]

For over 25 years, West Virginia Land Trust has been working to conserve West Virginia’s special places. Since 1994, it has protected over 10,000 acres of land, created outdoor recreation opportunities, safeguarded our drinking water supplies, protected scenic views, preserved historic sites and family farms, and much more.  Its mission is to conserve special places [...] 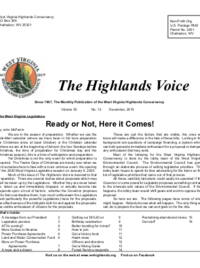