West Virginia has waived its opportunity to review the Mountain Valley Pipeline to determine whether it will cause a violation of West Virginia’s water quality standards. Under Section 401 of the federal Clean Water Act, federal agencies cannot authorize projects in a state unless that state certifies (called a 401 Certification) that the project will [...]

What’s Going On in the Mon?

In an effort to find out about activities and initiataives in the Monongahela National Forest, West Virginia Highlands Conservancy Board member Adam Casseday interviewed District Ranger Jack Tribble of the Greenbrier District of the Monongahela National Forest.  Here are the results of the interview:   What is new on the Greenbrier District?   We have [...]

Amazon Smile Amazon (the shopping company, not the river) has a program to support organizations such as ours.  To participate, all you have to do is order through Amazon Smile instead of through the regular Amazon website.  Just start your shopping by going here: http://smile.amazon.com/ch/55-0523780  and then shop as usual.  Amazon will donate a small percentage [...]

The United States Forest Service has approved the crossing of the George Washington and Monongahela National Forests by the Atlantic Coast Pipeline. This is no surprise.  In July, 2017, the Forest Service issued a draft decision, saying that it intended to approve the pipeline.  Then it gave the public a few weeks to make comments, [...]

The People Speak about the Clean Power Plan

By John McFerrin From all over West Virginia, they came.  From around the country, they came.  With a stubborn determination to say something, even when you know nobody is listening, they came.  There was a hint of Mr. Smith Goes to Washington, mixed with a belief that if you continue to speak the truth things [...]

A Loss of a Friend

Peter S. Shoenfeld, devoted husband and father, mathematician, and lover of the outdoors, and West Virginia Highlands Conservancy member and Board member, died on Monday, November 13, 2017. Peter was born in 1939 in New York City. His family moved to the Washington DC area two years later when his father joined the information office [...]

By George E. Beetham Jr. Peter Schoenfeld was my first contact with the West Virginia Highlands Conservancy. It began with plans for a string of wind turbines stretching along the Allegheny Front from Stack Rocks less than a mile from Bear Rocks northward to beyond Route 42. Stack Rocks is a fairly popular hiking destination [...]

By Hugh Rogers At the celebration of Peter’s life, a full house, very few of whom would have been Jewish, learned multiple meanings of the Hebrew word “shalom.” It is not only “peace,” it is “community,” and also “home.” During the service, this pregnant word was repeated almost as often as “Adonai.” It seemed especially [...]

The “Shoenfeld Estimator”: Where It Came From and How It Grew

By Frank Young Back when the first wind farm was proposed for West Virginia ridges (year 2000), I was WVHC president. After about a year of recognizing myself as wind committee Chair, I decided that someone other than the President should Chair that committee.  Peter Shoenfeld let me know that he would Chair a WVHC [...]

By Lenora Coberly   After school on December afternoons the children walked up Baptist Church Hill to practice for the Christmas Eve Program.   Mrs. Booth played the piano as we marched and sang of the long ago Bethlehem gift brought to our eager waiting valley.   The little ones, coached to memorize and stand [...]

By Cindy Rank Salt, salt, salt ??? Radioactivity??? While the debate rages in trade magazines as to just what might be the accurate long-term predictions for gas prices, availability of shale gas, and even the sustainability of current production levels, a multitude of support facilities are being proposed and permitted (i.e. new and upgraded compressor [...]

By Edwina Pendarvis   Salamanders, startled into being, flicker far away.  Through the banked fires of autumn moss and leaf-litter, they arc across the synapses of yellow birch and red spruce on mountain peaks lifted from an empty sea.   Triumphant myriads—scarlet, brass-flecked, jet-black and muddy (autochthonous as Adam), sluggish or coursing through the roiling [...] 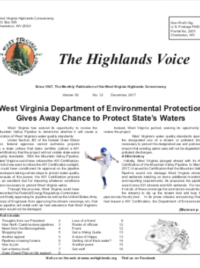