By Lewis Freeman, Executive Director, Allegheny-Blue Ridge Alliance Dominion Energy and Duke Energy, partners in the Atlantic Coast Pipeline (ACP) project, announced on July 5 that they had decided not to proceed with the project.  In a joint statement, the companies said: “This was a necessary decision given the legal uncertainties facing the project, and we [...]

July has been an exciting month for the West Virginia highlands and various projects that WVHC has been working on for so long. As we say on our web page we are “Preserving West Virginia for future generations”. Thanks to the continued support of our membership we are able to continue to promote, encourage and work [...]

Because the pandemic is ongoing, the West Virginia Highlands Conservancy has cancelled its events.        The quarterly Board meeting set for July was cancelled.  Because our Board contains some persons of a certain age, we thought it best not to chance it.        We have also cancelled our Fall Review, originally set for October.  It was scheduled to include [...]

What’s Next for the Allegheny-Blue Ridge Alliance

By Cindy Rank In the May 2020 issue of The Highlands Voice and again in June we talked a lot about chickens coming home to roost, how the bonding program in West Virginia has been inadequate from the get-go when it was first approved in the early 1980s and how it has only gone from bad to [...]

By Cindy Ellis In 2012, the West Virginia Highlands Conservancy and allies hosted a “Wellness and Water” conference in Morgantown, followed by similar day-long or weekend meetings in Buckhannon in 2013 and in Charleston in 2017.  There were many fruitful exchanges of ideas and emotions; attendees were gratified to make friends and feel supported.  Some subtopics [...]

Leer Mine Revision Threatens the Tygart

By Cindy Rank For the past ten years readers of the Highlands Voice have seen a multitude of articles about Arch Coal’s ICG Tygart Leer mine next to the Tygart Lake and State Park in Taylor County and the impacts of that operation on the water and homes and properties that overlie the 6,000-acre longwall mine. Especially [...]

By Cindy Rank Voice deadlines often rattle my brain as I puzzle over how to relate a recent development in some one of our, by now, four score and umpteen legal actions against coal companies that are polluting the environment. Take for example our actions with regard to Bluestone Coal violations at its Red Fox mine [...]

Some Hope for Migratory Birds

By Dylan Cooper   An important historical site in Virginia got a long-awaited face-lift after more than 70 years of being hampered by the presence of man-made barriers to aquatic organism passage.    Bob Downey Branch, a Class III wild trout water, is once again open for trout thanks to efforts by Trout Unlimited and the George Washington [...]

The Atlantic Coast Pipeline and the Law

By John McFerrin             Now that the Atlantic Coast Pipeline has been cancelled, there will always remain the question of whether it was ever really possible.             Of course, anything is possible if you have enough bulldozers and a certain attitude.  The real question, however, is whether it was possible without cutting legal corners and inflicting unacceptable havoc [...]

As reported in the May issue of The Highlands Voice, a United States District Court Judge in Montana has voided Nationwide Permit 12, an important permit that is necessary for waterways and wetland crossings for pipelines.  Because the permit which the Court declared void was nationwide, this has an impact upon all pipelines, including the Atlantic Coast Pipeline [...]

As reported in earlier issues of The Highlands Voice, the West Virginia Highlands Conservancy has published a survey (March, 2020) on climate change and published the results of the survey (May, 2020). At about the same time as West Virginia Highlands Conservancy was conducting its survey, Trout Unlimited was conducting a survey of its own.  Because Trout Unlimited [...] 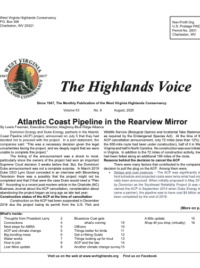