We Have Wilderness; Now We Need to Work to Keep It Wilderness

By George E. Beetham Jr. On October 13, 1746, Thomas Lewis, a surveyor from the Shenandoah Valley of Virginia was a member of a survey team headed by Peter Jefferson, father of Thomas. The party's mission was to survey the boundaries of Lord Fairfax's large estate. Near the ridgeline of Allegheny Mountain they encountered a [...]

Thoughts from our President

By Larry Thomas Old-Growth Forest in West Virginia To the untrained eye it is a group of really big trees, but to Doug Wood, a retired Department of Environmental Protection water-quality official, who is helping spearhead an effort to identify old-growth tracts, particularly on public lands,it represents another potential stand of old-growth forest here in [...]

By Hugh Rogers It’s been a long hike to a new edition of the Monongahela National Forest Hiking Guide. Some of our companions didn’t make it all the way. We miss our primary author of the 5th through 8th editions, Allen De Hart, and our former editor, Bruce Sundquist. Both men died in 2016. Fortunately, [...]

The Land and Water Conservation Fund is scheduled to expire on September 30, 2018. There are efforts afoot to keep that from happening and to keep it authorized permanently. The Land and Water Conservation Fund (LWCF) was created by Congress in 1965.  It represented a bipartisan commitment to safeguard natural areas, water resources and our cultural [...]

By John McFerrin A lot of the July meeting of the West Virginia Highlands Conservancy Board meeting was the same old, same old:  we still have members; membership secretary Beth Little told us how many; we still have money; treasurer Bob Marshall told us how much. Nothing much has changed. The most significant thing we did [...]

By Kate Mishkin The 4th Circuit Court of Appeals vacated the Bureau of Land Management’s decision to grant a right of way, and the U.S. Forest Service’s decision to allow a right of way and construction through the Jefferson National Forest after both were challenged by a coalition of citizen and environmental groups. “American citizens [...]

By Rick Webb, Highlands Conservancy Board Member and Chair of the Allegheny-Blue Ridge Alliance CSI Program The Pipeline Air Force, a component of the Pipeline Compliance Surveillance Initiative (CSI), has conducted multiple surveillance flights over Atlantic Coast Pipeline (ACP) construction areas in West Virginia in recent months. This report includes some of the thousands of [...]

Several citizen and environmental groups, including the West Virginia Highlands Conservancy, have asked that construction of the Atlantic Coast Pipeline be halted because it does not have the proper permit to cross streams and wetlands.  The groups took two actions. First, they filed a petition for review with the Court of Appeals for the Fourth [...] 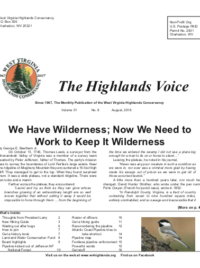