How Stands the Mountain Valley Pipeline?

By John McFerrin             In planning the Mountain Valley Pipeline and getting the permits needed, its developers face a fundamental challenge:  the pipeline, as proposed, must cross 591 streams in West Virginia, not including the ones it must cross in Virginia.  Each of these requires approval from a regulatory agency.  There have been twists and turns along the way [...]

Spring officially arrived on March 20 here in the highlands. As winter is fading away one finds evidence of the different stages of the annual transition, certainly an annual time of renewal. Trees at lower elevations are greening, but high on the ridge’s trees are still the stately statues of winter waiting for it to [...]

By Mike Tony The West Virginia Senate has passed legislative rules on environmental protection that include a weakening of water quality standards for certain carcinogens, sending the rules bundle to Gov. Jim Justice for his signature. The rules package also strengthens some water quality standards and has been defended by the state environmental regulators who proposed them. [...]

by Marion Harless          Wisconsin’s Senator Gaylord Nelson thought it would be wonderful to have a student led teach-in on the environment at the nation’s colleges and universities.  He put together a packet of environmental information and organizational aspects, made it available to interested schools and named Dennis Hayes as his lead student.  Dennis is still working at [...]

Things get a little bit better for birds

By John McFerrin             For a migratory bird, life is no picnic.  Many of them travel thousands of miles.  Even if they can escape natural predators and overcome exhaustion, they still have to avoid power lines, wind turbines, oil and gas ponds, etc. along the way.             Occasionally, however, there are bits of good news: Painting wind turbine blades [...]

Camp Waldo is an environmentally focused, nonprofit summer camp in southern West Virginia. It invites campers and counselors to apply to join us at for a three-week overnight camp from July 10-31. It welcomes any children, boys and girls, who are currently 3rd-7th graders. Camp is $200 for the entire three-week session, less than 10% of the actual [...]

By John McFerrin             West Virginia is considering how it will determine whether the water in streams and rivers is clean.  The West Virginia Highlands Conservancy and the West Virginia Rivers Coalition are trying to make sure it uses the most accurate measure possible. Background             Everybody wants clean water.  As a matter of law, esthetics, public health, or [...]

WVHC, now in its 54th year, currently serves approximately 1,500 members and supporters with a strong history of promoting, encouraging, and working for the conservation and an appreciation of the natural resources of West Virginia focusing primarily on the Highlands Region. Protecting clean air, clean water, forests, streams, mountains, and the health and welfare of the people that [...]

Plenty of Problems for Proposed Experimental Mine

By Jeanne Bell The final Environmental Impact Statement is scheduled for release mid-summer 2021 for the National Institute for Occupational Safety and Health (a part of the Center for Disease Control) project to replace the abandoned Lake Lynn Experimental Mine with a new underground facility to be built in Mace WV on a 461-acre property [...]

What’s Up with the Legislature?

By John McFerrin             As this issue of The Highlands Voice goes to print the West Virginia Legislature is entering its last, frenetic days.  Pending bills compete for attention, a spot on the agenda, the support of the big dogs, etc. while everybody watches the clock in hopes of some bill passing or failing to pass before the time [...]

By Cindy Rank As portions of the world – including the U.S. – begin to seriously look beyond coal, regions once dominated by coal and coal mining are now facing clean-up of the inevitable detritus left behind by this once imposing presence. And yet, even the remnants and hangers-on scream for attention.  The West Virginia Highlands [...] 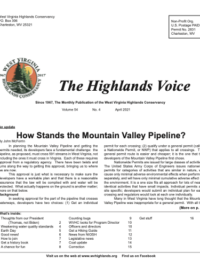