March, the month that will change our lives forever. It’s hard to believe the change in our world that has occurred with the Coronavirus pandemic spreading to over 140 countries. Who knows how long this worldwide event will last, but one thing seems for sure? Human activity throughout the world, including West Virginia, will likely [...]

By David Johnston Faced with overwhelming community opposition, it appears that FreedomWorks LLC will abandon its most recent attempt to build a pumped storage hydroelectric generating plant in the West Virginia highlands. At a public meeting in Petersburg on March 9, FreedomWorks principal Tim Williamson acknowledged a straw poll indicating that few, if any, landowners [...]

The Bad That Didn’t Happen

In December, 2019, much of The Highlands Voice was devoted to preparation for the 2020 session of the West Virginia Legislature. Among the stories was one by Beth Little.  It listed some statements by public officials and other indications that there might be a proposal to allow all terrain vehicles (ATVs) on public lands.  The same story also explained [...]

In Person Board Meeting Cancelled

Because of the corona virus and the recommended social distancing that resulted, the Board of the West Virginia Highlands Conservancy will not have the regular in-person meeting that was scheduled for April 26.  The Board is currently exploring options for having the meeting on line, over the phone, etc. It has been our practice for many, [...]

How to Do Social Distancing

For the last few weeks there have been innumerable (The Highlands Voice’s crack staff of enumerators lost count at a bazillion and twelve) newspaper and magazine stories full of tips on how to thrive during this time of social distancing.  This is one of the best.  It comes from the West Virginia Land Trust:  During this time of [...]

By John McFerrin Council on Environmental Quality has proposed changes to the regulations on how the National Environmental Policy Act is implemented.  If the changes become final, they would limit the scope of the Act, potentially limit public participation, and limit the duty of the agencies to look at cumulative impact of decisions.  Taken as a whole, [...]

By Katherine McFerrin Amid the COVID-19 pandemic one might wonder how this virus came to be. While it’s well known that the virus came from a live-animal wet market in Wuhan, China, there’s more to the background story than that. It’s been proposed that the virus was transferred to humans from pangolins that were sold [...]

WV Legislature- the Good and Not So Good of It

By Frank Young, WV E-Council Legislative Committee Chair The West Virginia state legislature adjourned in mid-March, just as the COVID-19 anxiety was cranking up--thus exchanging one social plague for another.  We herein report on the outcome of certain bills. VICTORY!             It was down to the wire, but we did it!  At 11:30 PM on Saturday night (the [...]

In February, 2020, The Highlands Voice had a story about the proposal by the United States Fish and Wildlife Service to designate critical habitat for the Big Sandy crayfish (Cambarus callainus) and the Guyandotte River crayfish (Cambarus veteranus).   The Big Sandy crayfish is federally listed as a threatened species and currently lives in specific watersheds of Virginia, [...]

By George E. Beetham Jr. Wisps of clouds ride on the wind Scatter and then assemble again Storm on the mountain rain for the land Water to nourish both creature and plant Sun fills the sky over the plain Vapor then rises to form clouds again Copyright 2020 by George E.  Beetham Jr.; reprinted by [...] 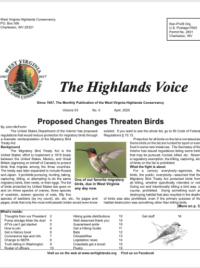