By Frank Young For 75 days--including for one week prior to and a week following the end of the recent 60 day regular session of the WV legislature--lobbyists for the WV Environmental Council (WVEC) walked the hallways of the capitol, attended uncounted legislative committee meetings, schemed with lobbyists from allied social justice organizations, encouraged citizens [...]

March was again another busy month for the environmental community both federally and within West Virginia. New Study Details the Increasing Risks of the ACP “The ACP is facing a triple threat,” so concludes a new study released March 25 by Oil Change International and Friends of the Earth.  Atlantic Coast Pipeline – Risk Upon [...]

By Randy Kesling FreedomWorkd LLC has submitted a proposal to the Federal Energy Regulatory Commission (FERC) to construct a Pump Storage Hydro Project (Project) In Tucker county. The Project would cover over 2500 acres of land, including United States Forest Service (Forest Service) land subject to potential impacts to environmentally sensitive areas.  The Project will pump [...]

Modern Jobs Act Can’t Get off the Ground

By John McFerrin In spite of its catchy nickname (The MOJO Act), the Modern Jobs Act did not make much progress during the 2019 session of the West Virginia Legislature.  It was not passed by either of the committees to which it was assigned. The MOJO Act takes several realities and tries to put them [...]

Nurdles and Crackers and More, Oh My!

By Cynthia D. Ellis In the mountains of West Virginia, we have concerns about the mega-pipelines that are proposed and progressing across private and public lands.  But we must not overlook the larger picture. Those pipelines are being vigorously promoted by a gas industry and its allies who see a wealth-generating boom in the production, [...]

Dear Editor: Do you remember the 2010, British Petroleum disaster in the Gulf of Mexico? This is the spill that fouled beaches as far as Florida and ruined Gulf Coast fisheries. According to a New York Times investigation, those pesky rules enacted to keep that from happening again are among the 78 federal environmental  regulations  [...] 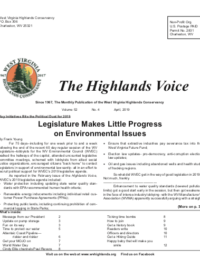