The 2018 West Virginia Legislature: What Happened?

The Big Kahuna of the 2018 Legislative Session was, of course, the teachers’ strike.  Teachers stuffed the Capitol, chanted, sang, waved signs, etc. until they finally got the pay raise they wanted as well as a commitment to progress on improving the Public Employees Insurance Agency. While the teachers occupied center stage and will be [...]

March proved to be another month a lot of activity. Mother Nature provided the greatest amount of snow of the winter for much of the highlands and has ended the month with an abundance of rain. There was also a flurry of activity with issues about which we are most concerned. Activities included: Mountain Top [...]

A Straw in the Wind? Or a Big Nothingburger?

During the most recent session of the West Virginia Legislature, one of the major issues was whether there would be logging in State Parks.  Thanks to substantial public outcry, that proposal lost. At the end of the session, after the proposal to log in State Parks was dead, the Senate Committee on Natural Resources passed [...]

Environmental Analysis as the Budget Burns

By Hugh Rogers Last month, representatives from the Highlands Conservancy, Sierra Club, Trout Unlimited, Friends of Blackwater, and Rivers Coalition met with Clyde Thompson, Monongahela National Forest Supervisor, and some of his staff at a “roundtable” in Elkins. Our organizations have been concerned about a recent push to streamline the process that examines environmental impacts [...]

The National Academies of Sciences, Engineering and Medicine has ended its study of the effects of mountaintop removal mining on public health.  The committee working on the project has been released and the project terminated.  Its mission would have been to review the evidence and determine what effect large surface mining operations have upon the [...]

Loss of a Friend and a Champion

The West Virginia Highlands Conservancy is grieved to note the death of our friend and board member, Don Garvin. He represented WV Trout Unlimited within our group and worked for many years on environmental concerns with the WV legislature. Known more recently for his lobbying efforts with ECouncil, Don was active with the West Virginia [...]

By Angie Rosser, West Virginia Rivers Executive Director West Virginia Rivers Coalition lost a leader March 29; and I lost a mentor and special friend. I met Don Garvin when I first started lobbying at the statehouse in the early 2000s; and then got to know him better when I served on the board of [...]

The United States is in the midst of a fracking boom. Short for “hydraulic fracturing,” the technique for exploiting deep deposits of natural gas and oil was virtually unknown before 2000. Now it accounts for more than two-thirds of all oil and natural gas production in the U.S., upward of 6 million barrels of oil [...]

By Matt Kearns, West Virginians for Public Lands The 2018 federal budget was more than a “day late,” but it was not a “dollar short” when it came to public lands funding. Overall, most land-management agencies and conservation programs saw an increase in appropriations. The National Park Service gets an additional $175 million to chip [...]

Virginia Board Confirms: Dominion’s Atlantic Coast Pipeline Could Cost Virginians up to $2.3 billion

Curbing our Appetite for Plastics

By Jackie Burns Earth Day theme and campaign The 48thannual earth day is fast approaching.  The theme this year is “ending plastic pollution.”  Why are these seemingly stable polymers a problem? And what can we do about them? Plastics are used to make many things: beverage bottles, clothing, porch decks, carpeting, electronics, etc.  Plastics are used [...] 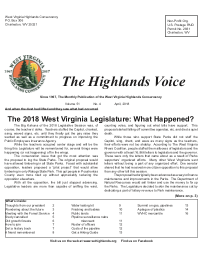