By John McFerrin Our public lands are in peril.  There are moves afoot to transfer those lands to the states or sell off public lands. The idea that the federal government should not own large tracts of land is, of course, not new.  The public career of Cliven Bundy and standoff with the federal Bureau [...]

By Cindy Rank Spring has sprung, the grass is riz, I wonder where the sanity is … Here we are, every month or so expounding on successful federal court challenges of the coal industry at one or another mine sites where water discharges from those mines are causing damage to the health of the receiving [...]

By Cindy Rank Yes, the “Cancer Creek” bill, vestige of the past, has resurfaced ---- this time it has blurred the vision of enough West Virginia legislators to float them blithely along in murky waters to the final approval of the bill. When the “Cancer Creek” Bill appeared some 25 years ago during the time [...]

Get a Good Lawyer

A look back at our 50 years of actions for the mountains shows that the Highlands Conservancy has had plenty of help.  Groups and individuals joined with us in efforts to conserve and protect.  We worked with others to communicate, educate, lobby, and affect legislation.  But sometimes, when there was no other recourse, we have [...]

Most issues of our monthly newsletter, The Highlands Voice, beginning with Volume 1, in 1969, are archived on our website at www.wvhighlands.org.   Enjoy the following highlights taken from 1975   Eastern Wilderness Act  passes  After more than 5 years of frustrating postponement, compromise and revision, the Conservancy’s efforts on behalf of Eastern Wilderness bore [...]

As The Highlands Voice goes to press, the Legislature is still in session.  Anything could happen.  HB 2506 (Cancer Creek) has passed both the House and the Senate and awaits the Governor’s signature to become law.  There is a last ditch effort to persuade the Governor to veto it but that is unlikely.  The odds [...]

Study of Health Effects of Mining Gets Going

For years, groups, researchers, and individuals have been saying that mining, and particularly large scale surface mining, has an adverse impact upon public health.  For a little history of some of the times that the West Virginia Highlands Conservancy and others have been saying it, see the September, 2016, issue of The Highlands Voice.  To [...]

By Hugh Rogers The most vivid trail name on the Monongahela National Forest must be Flame Azalea.  Does it have any rivals?  Of the 200 trails on the Forest’s inventory (still including Flame Azalea, though it is said to have been dropped), nearly all are named for a general location. Typical examples up here in [...]

The Industrialist and the Mountaineer: The Eastham-Thompson Feud and the Struggle for West Virginia’s Timber Frontier, by Ronald L. Lewis (Morgantown: West Virginia University Press, 2017, paperback, 301 pages). Reviewed by Paul Salstrom Not all feuds are cut from the same board.    But this Tucker County feud, like the Hatfield-McCoy feud around the same time [...]

There are a couple of bills that may be of interest to Voice readers.  With the usual disclaimer that, this late in the session, things change every few minutes, here are some updates, guaranteed to be true as of press time but not beyond that. Local Energy Efficiency Partnership (LEEP) Act This Act has gained [...] 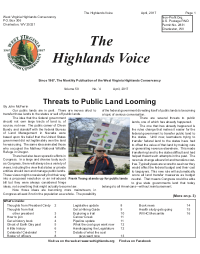